I'm sorry for the delay in my blogging! I plan to make up for it so plenty of posts are coming your way!

Well, I got lost on my way to the open house at IAU (Institute for American Universities).  In my defense, it was only my second time walking to the school.  Luckily, I used my map to find the school.  It was easy once I found where I was on the map.  The open house was basically just a bunch of the students from the program in a room with a very very high ceiling, which I will come to know as the Main Hall.  The ceiling led to a lot of echos in a room full of talking people which made them talk louder to hear each other over the noise.  I saw several of the Gettysburg students, including Will, who was happened to sit across the aisle from me on our flight from Brussels to Marseille.  We caught up and talked about our host families.  After the open house, Will, Andrew (another IAU student, and I walked around Aix looking for somewhere for Will to eat since he hadn't had lunch.  After some wandering, we soon realized it was close to dinner time and decided to walk to our respective homes.  I still haven't quite gotten the sense of time here which is probably due to my lack of adjusting to the 24 hour clock and frankly to my lack of an internal clock. 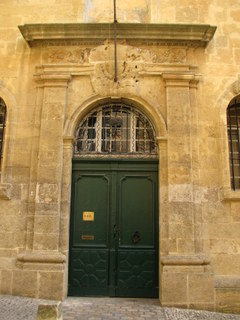 This is the main IAU building.

The next day we had our full day orientation at IAU.  I managed to get there without getting lost which made me happy.  I learned some useful and interesting information that day.  One kinda funny thing I learned was, "Don't Make Eye Contact!" Eye contact carries a very different weight here.  I think this is best explained by a story of what happened to a friend I met at orientation.  She was crossing the street and was absentmindedly looking at the other side of the street.  Little did she know there was a guy that thought she was looking at him.  He bought her lunch.  So I learned they weren't kidding about this eye contact thing.

The day after orientation was the first day of classes which brought me one of my many face palm moments.  So I walk into my first class and I get very confused.  It looked like the class had been going on for twenty minutes but I thought I left the apartment with enough time to be early to class.  So I embarrassedly sit down in the second row and get situated.  I check my schedule and make sure I went to the right classroom.  A few minutes later, the professor asks me what my name is and tells me I'm not on her roster.  We both figure I'm in the wrong class and she asks to see my schedule.  I show her and finally realize I was looking and the classroom for my Monday class and we started class on a Tuesday.  I then find the correct classroom and sit down.  Luckily I was still early.  Later when my professor walks in the classroom I immediately recognize her as the professor whose class I just wrongly sat in on.  The embarrassment continues.  After calling my  name during role she asks me if I was the student that was just in her other class.  This class was French 307: A Conversation and it was a little over my head.  Everyone in the class had taken at least one more semester of college French than me and were definitely above my skill level.   Needless to say I switched classes.  Goodbye Fre 307, Hello Fre 335 (aka Phonetics).  The students are still mostly above me but I feel more comfortable and I know the class is going to help my French a ton!