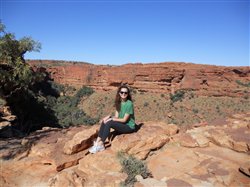 In the beginning of my study abroad search, I was debating between Europe or Australia. Both areas of the world have so many opportunities for college students like me. Ultimately, I chose to study abroad in Australia because of cost, availability after college and the coolness factor. My argument for heading to the Land Down Under was the timing. When else am I going to be able to spend this much time exploring a country halfway around the world? With Europe, I felt it was more accessible a destination from the United States-some place I could go to in the future.

Australia has the perfect combination of adventure and leisure that I was looking for. In preparation for my semester in Newcastle, New South Wales, I became scuba certified. As cliché as it sounds, my trip to the Great Barrier Reef was life changing. Swimming around with creatures that call the largest nature wonder their home was something I wouldn’t be able to experience anywhere else on Earth.

Not only does Australia have gorgeous beaches, but it has a rich cultural tradition too. The Aboriginal people are one of the oldest cultures still in existence. At the University of Newcastle, I took an Aboriginal Studies class to learn more about the history of Australia, its colonization and the past and present impacts on the Aboriginals.

Another highlight of my time in Australia was a camping trip through the Outback. You can’t studying in Australia and not see kangaroos, dingoes and koalas* in their natural habitat or visit the famous Uluru Rock. Sleeping on the ground in a bed roll was definitely outside of my comfort zone but something I would have regretted not doing. Besides, the nighttime canopy of the Milky Way was beautiful. A precursor to my Outback excursion, I ventured to a neighboring town to an Australian wildlife rehabilitation center for a day trip.

From the sea to the Outback, Australia has a wide range of activities for any study abroad student. Everyone I met was extremely pleasant and genuine. Also being able to communicate is important in a new environment which was another reason I chose to go to Australia. It was fun to find out the different Australian words and pick up on the lingo.

All in all, I would love to go back to Australia. There are so many places left to explore. Who wants to join me in the Land Down Under?

*A fun tidbit I learned abroad was that a koala is a marsupial and therefore shouldn’t be called a koala bear. Silly me!

Kim Osborne is a senior at the University of South Carolina. She studied abroad at the University of Newcastle, Australia, in the spring of 2011. While abroad, she was a student blogger for the Embassy of Australia. Upon her return, Kim created a campaign to increase awareness of Australia as a study abroad destination called Gamecocks Down Under. Feel free to tweet her any questions about studying abroad.