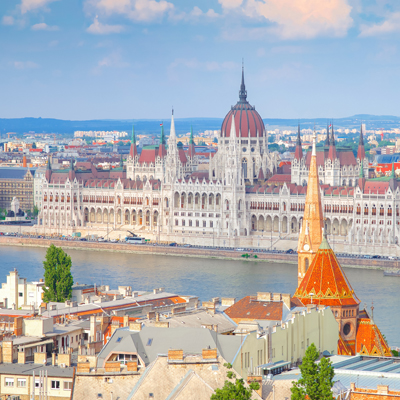 Framing the Danube River on both sides, Budapest is a hidden gem of Central Europe, a city dating all the way back to the ancient Roman Empire with a fascinating history. When you study abroad in Budapest, you’ll learn about the impact of World War II and the Soviet Union’s occupation of the Hungarian capital simply by exploring the city streets and monuments, featuring architectural styles ranging from Gothic to Baroque to Art Nouveau. The city’s flowering gardens and jaw-dropping parks, some of which you can find on the seven islands peppered throughout the Danube, will keep you tied to nature while you study abroad in Budapest.

Here, you’ll learn why Hungarian food is often considered the tastiest and most popular of eastern and central Europe as you try everything from classic stews to delicious pastries. When in Budapest, you’ll also savor the spa culture by soaking in the city’s thermal baths, which are fed by natural hot springs.

With a newly unveiled CEA program, you can now study abroad in Budapest to further your education and set the stage for your future. Explore the history, scenery, academics, food, activities and transportation in Budapest below.

The uniquely charming city’s 1,000-year-old culture is just a scratch on the surface of Budapest’s rich history and what it has to offer residents and visitors alike. Bisected by the Danube River, Budapest has two sides -- Buda and Pest -- each with its own uniquenesses. On the Pest side, you’ll see the largest parliament building in Europe, charming flea markets, riverside walking paths, antiquing opportunities, bookstores and beautiful cafe houses. On the Buda side of the river, there’s a historic castle district with museums, Roman ruins, medieval streets and houses, and even caves.

The city’s storied culture is a major draw for study abroad students -- and thanks to CEA Study Abroad’s new program at Corvinus University of Budapest, you can immerse yourself in this stunning Hungarian city. Learn more about the city’s history and charm here.

CEA students at Corvinus University of Budapest can spend their semester enrolled in one of two programs: Business & Economics or Social Sciences.

Take the Business program in Budapest with local Hungarian and other international students. You;ll enjoy courses in marketing, finance, and economics, with an option to choose from a variety of humanities courses such as political science, law and more. All CEA courses through Corvinus are taught in English, with the exception of a beginner Hungarian language course.

Budapest has one of the best public transportation systems of all European capitals. The Budapest Card holder can travel without restrictions and for free within the city limits on more than 200 bus, 32 tram, 15 trolley and 4 metro lines, on the HÉV Suburban Railway and with boats. You can also take a free trip to the hills of Buda with the cogwheel railway.

Check out one CEA alumna’s experience visiting Budapest and her tips for taking public transportation.

Curious what the food scene is like in Budapest? It’s been known for its diversity… and delicious variety for an affordable price. Take a look at this CEA student’s perspective as she tried different Hungarian dishes and enjoyed them all on a reasonable budget. From goulash and chicken paprikash to chimney cakes, stuffed cabbage and Lángos, there’s plenty to try when you study abroad in Budapest.

Things to Do in Budapest

Wondering what there is to see and do when you study abroad in Budapest? Here’s just a small sampling of what the city has to offer:

Buda Castle & Castle District: Ride the funicular train car up a steep hill to the famous Buda Castle, where generations of Hungarian royalty once lived. The palace complex is perched on Castle Hill, just next to the Castle District, which is filled with medieval, Baroque and neoclassical architecture. You’ll marvel at the castle’s impressive sculptures, a gorgeous fountain, gardens, a cave system, and wine cellars. The Budapest History Museum is also housed in the castle.

House of Terror: Learn about Hungary’s shadowy political history in the building that formerly contained the country’s Nazi headquarters, the Hungarian Communist Secret Police, and the fascist Arrow Cross party. The permanent exhibition covers these oppressive regimes that dominated Hungary throughout the 20th century and allows you to take a tour through some of the former prison space in the basement.

Széchenyi Thermal Baths: Soak in Europe’s largest medicinal bath, where the water contains important minerals. The pools offer a variety of temperatures and depths, and the bath complex also offers saunas, steam, massages, and other spa services. Opened in 1913, Széchenyi Bath is also a fascinating piece of Budapest’s history and a good example of neo-Baroque architecture.

Ruin Pubs: Spend a night out with friends in one of Budapest’s “ruin pubs,” which encompass hip bars opened in abandoned buildings that were never renovated. Ruin pubs have become incredibly popular with Budapest locals over the last decade, as they offer an exciting, gritty atmosphere in a space that’s often decorated with retro furniture and quirky art.

Learn more about things to do in Budapest as a study abroad student. Need more ideas? From riding a river boat along the Danube to shopping at the city’s markets, this blog has affordable activities to keep in mind when you study abroad in Budapest.