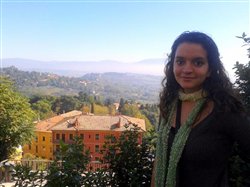 My name is Lynette Quezada and I’m an International Affairs major at John Cabot University. I’m from Miami, Florida and the daughter of a Mexican father and a Cuban mother. For as long as I can remember, I have been fascinated by cultures and the politics that exist between nations.

Many students that come to John Cabot initially underestimate the challenge of living in a completely new environment. The first two months weren’t the easiest and I constantly missed my family, but eventually the John Cabot community helped me surpass this transitioning period. From day one, the orientation leaders were extremely welcoming and advised me to join student clubs and become active in student activities, and as a result I joined the drama club, where I performed in both the “The Wiz” and “Grease,” and advocated for women’s recognition with the Ipazia Club. I’m currently Secretary of Student Government and I’m enjoying every second of it.  I found that the John Cabot community is full of students who went through the same experience I did and were more than willing to sit down over a cappuccino and listen to my challenges and worries. 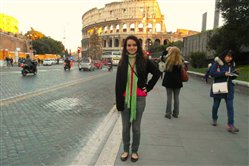 John Cabot University’s small classes allow students to get to know their professors, which has hugely impacted my academic experience.  I’m interested in working with international development, human rights, and the relationship that exists between religion and politics.  Class discussions have definitely helped pave my mindset and focus on my future by allowing me to learn international perspectives of my classmates and learn from professors who have professional experience in the field.  John Cabot offers internships and direct exchange programs which allow students to have actual work experiences and to study abroad. I am currently planning to study abroad this spring semester in Seoul, South Korea, and I plan to apply through John Cabot’s Career Services office for an internship in China over the following summer.

John Cabot has opened up so many possibilities in my life that once seemed impossible.  For an education in International Affairs, I definitely couldn’t have chosen better!

This is a guest blog from Lynette Quezada who is studying at John Cabot University in Rome.