...with a long history and many stories, some of which I'll spill.

I have ventured up Wawel Hill, home to Poland's most important castle, Wawel Castle, several times, and besides being in awe of the whole scene every time, I'm also glad that I live nearby since there's so much to see up there! It's also nice because I can go up and wander the grounds for free from morning to sunset - meaning that at off times I can almost have the whole place all to myself. This has happened to me before, and I love it because I can enjoy the place even more and take everything in, but it's also funny because I doubt the residents of Wawel throughout history ever really had the place to themselves, and they lived there, haha!

Photos are unfortunately not allowed inside the buildings (church, crypts, state rooms, museum exhibits, royal residences etc.), so my shots are all exterior, but still give a good idea of the place I think. These were taken at different times, as can be seen by the snow or lack thereof! I've included LOTS of photos, partly because I have so many of Wawel and also because the place is just too drop dead gorgeous to not show it off a bit. ;-)

The front of colorful Wawel Cathedral, one of the most famous images in Krakow. Polish war heroes, royalty and other notable people are buried in the crypts here: 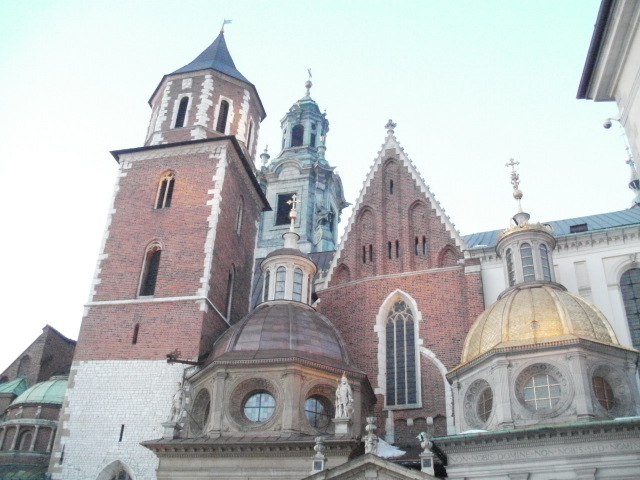 View from the hill's north entrance: 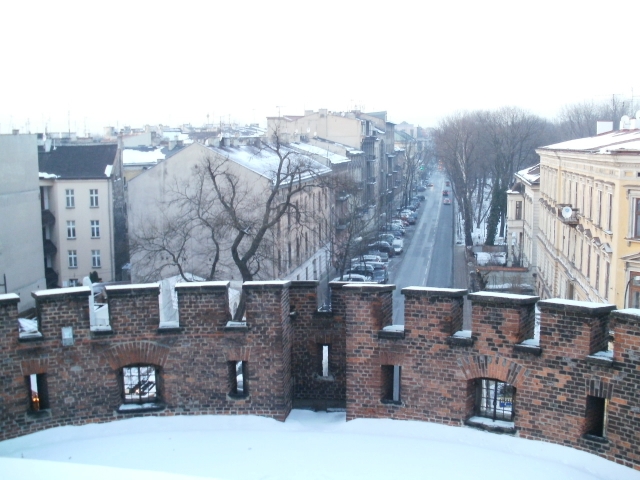 Back side of Wawel Cathedral: 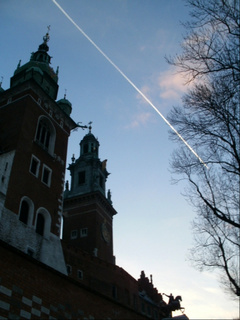 My cousin Carolyn standing under the north side gate: 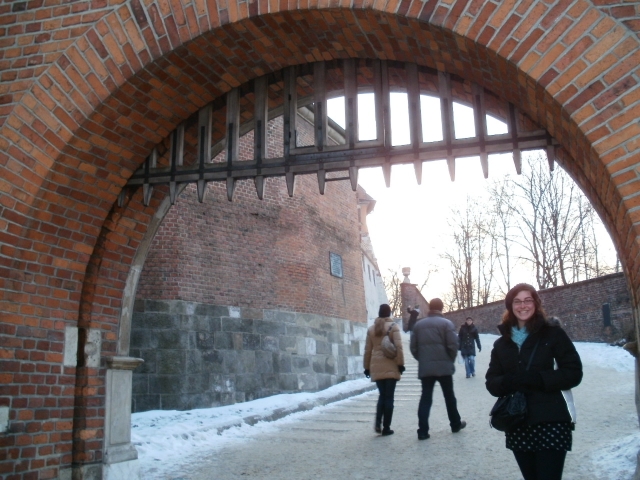 Me by the river overlook - pretty sunset that day! (photo thanks to my cousin): 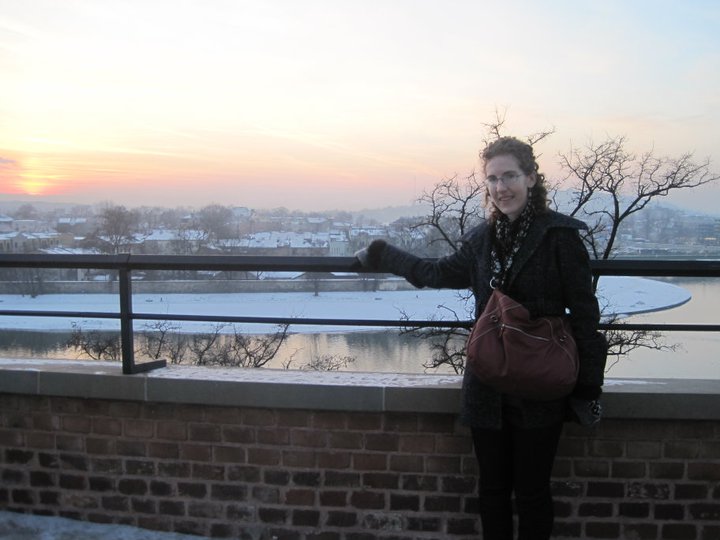 Before getting to a series of courtyard shots coming up, I will mention a couple of stories. First is that of the dragon that I have written a post about - you can find it here. The whole story is there, but I'll mention again now that Smok Wawelski (Wawel Dragon), as he's known, once lived in a cave in the hillside that can still be toured and is popular with kids. While previously feared in the area, the dragon has made a complete turnaround and become a huge star in Krakow, and related memorabilia can be found at every tourist shop and cart nowadays. I too am smitten by the cute dragon toys and bought two matching stuffed animals, haha! Here they are, awww: 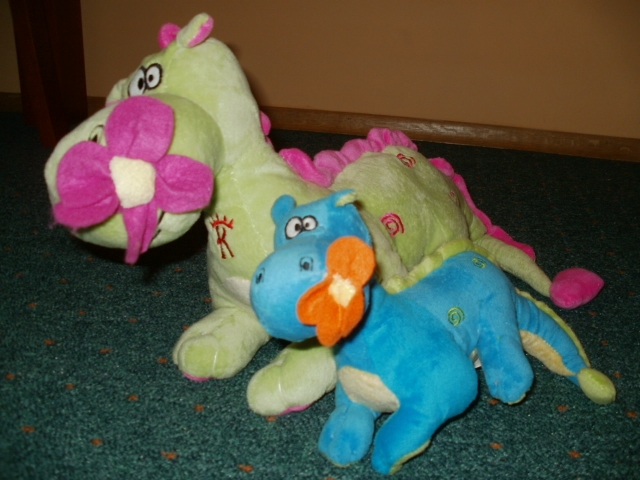 Another story tied with Wawel Hill is also a mystical one. Some believe that one of seven chakras (from Hinduism), or energy sources, is buried in the hill, and a specific wall in the courtyard is where that energy radiates from. Pilgrims have come from all over the world to touch this part of the wall and pray by it - so many that it began to wear away and had to be painted over. This keeps staff at Wawel from discouraging that sort of thing and not mentioning the chakra in any guided tours. Rick Steves goes over it briefly in his write-up on Krakow.

And now onto the amazing courtyard, my favorite part of the castle! 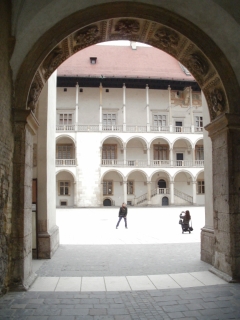 Incredible!! And SO quiet - not a soul around...well maybe some "unseen souls"...I wouldn't be surprised to encounter one here, especially with no tourists in sight! 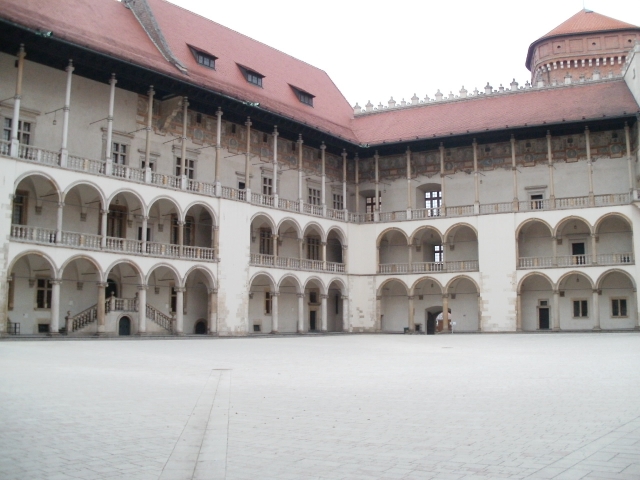 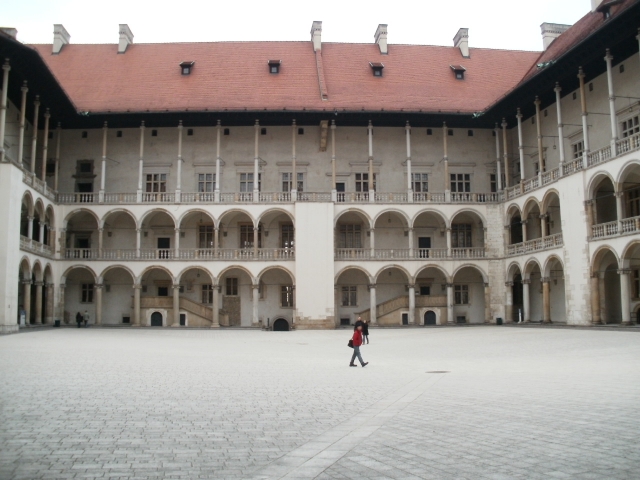 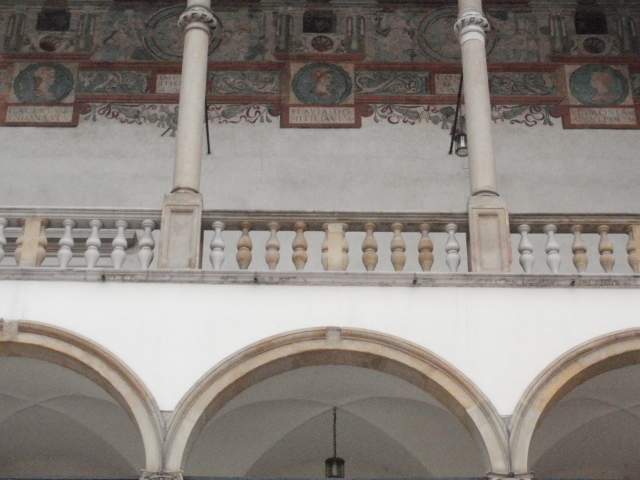 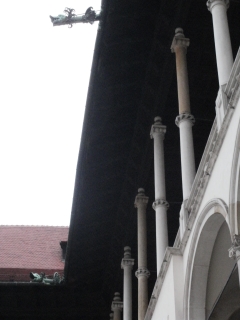 Can't you just imagine all sorts of royal ceremonies taking place in that grand courtyard? It is featured in movies about this next story that revolves around a former queen of Poland from the mid-1500s, Barbara Radziwill. She was a Lithuanian noble but not a royal, and the Polish king at the time married her despite high disapproval from his court and mother. The mother was suspected of poisoning his first wife for not producing an heir to the throne, and is thought to have done the same thing not long after that to Barbara, her son's true love, because she didn't like her. Barbara died at Wawel Castle just a few months after marrying King Sigismund Augustus. Read more about this very dramatic and tragic medieval soap opera here.

Spooooky looking!! The hen's foot tower (far right) was once used as a science laboratory in the early 1600s: 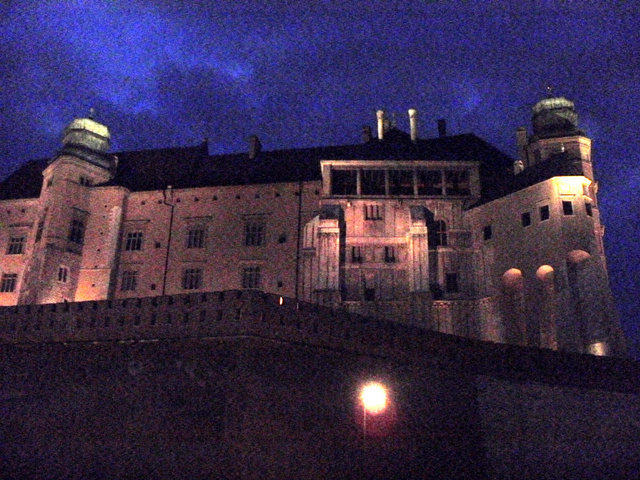 More spookiness!  The sky on this particular evening was really cool: 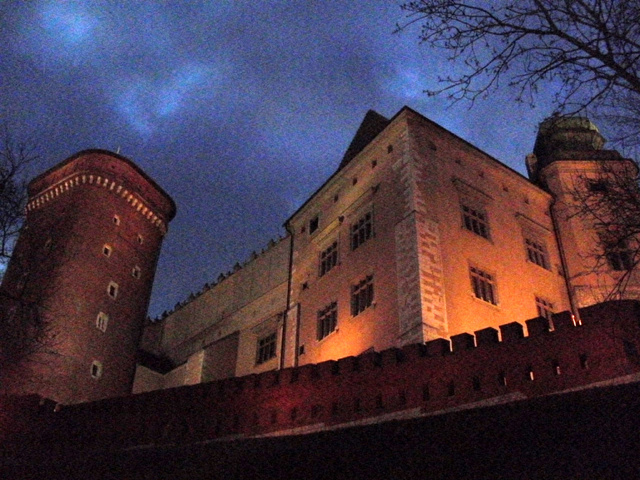 Even the doors are intricate at Wawel: 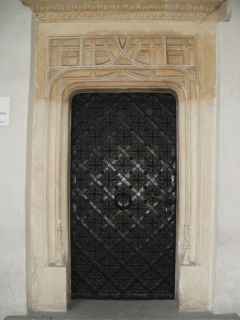 So many beautiful doorways: 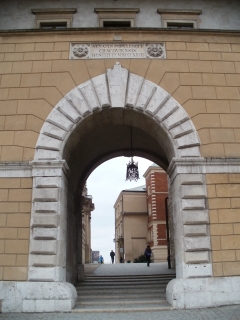 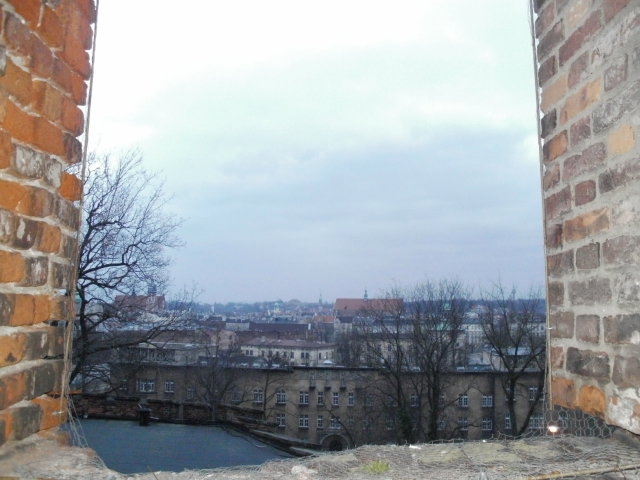 The last legend I'll talk about in this post is that of princess Wanda, King Krak's daughter (the city is said to be named after Mr. Krak). About 1,000 years ago, a German prince wanted to marry the single and uncommitted Wanda in order to gain more land for the Germans, but she refused, determined to save her country's independence. But since the German prince had threatened to invade Poland if she said no, she sacrificed herself to the gods by jumping into the Vistula river in order to avoid marriage and in return for the protection of Poland from the powerful German army. Another twist on this tale is that Wanda's army took on Germany and against the odds beat them, and Wanda's choice to end her days in the river was made to thank the gods. A mound was built in Krakow in Wanda's honor and still stands today. For more details about Wanda's story, check out this page.

My handy English guide for getting around the complex: 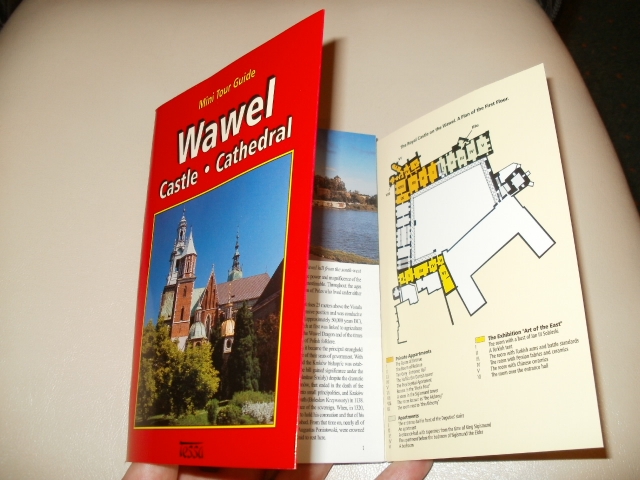 If I had lost the guidebook at least this model is up there too :-) 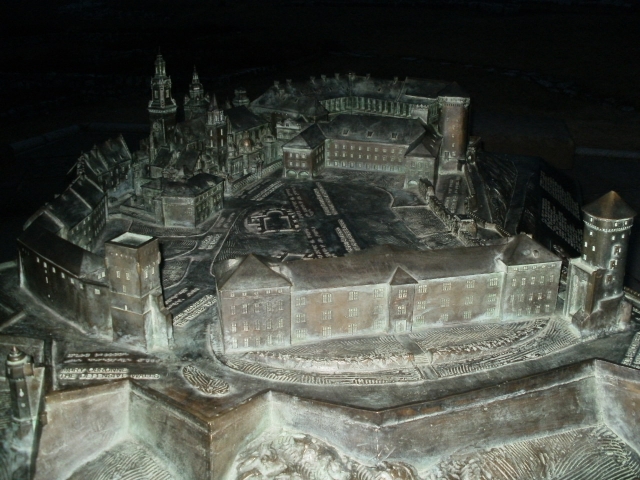 Spring has arrived in Krakow! If eating ice cream outside in the warm sunshine isn't a sure sign, then I don't know what is! 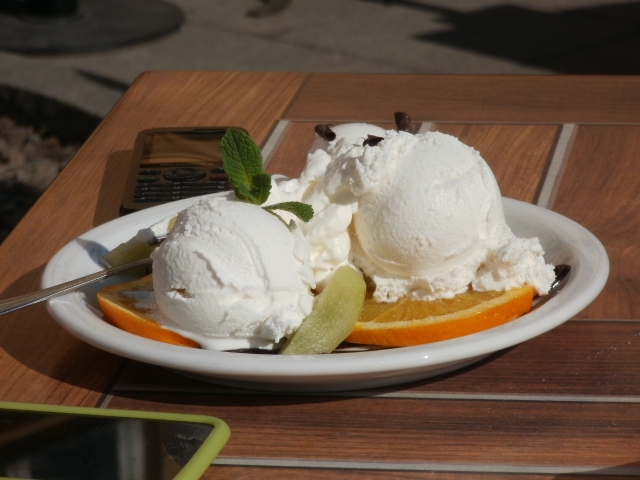 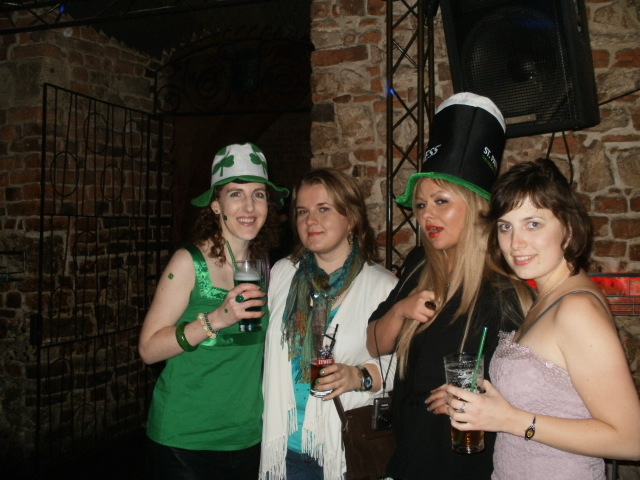 And finally, the Funny Pigeon Pic - birdseed feast!!! A kind stranger dropped some off for them on the sidewalk: 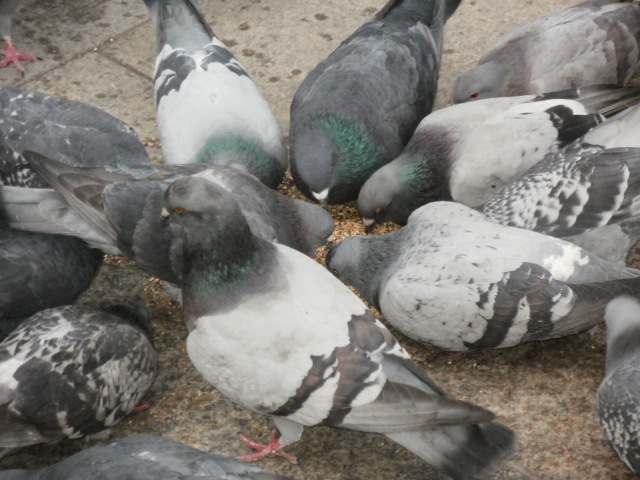 Next up - a funky photo tour of Krakow - some random, goofy and unique shots I've collected over the past several months in this exciting city!