What To Do When You're Not At Home For The Holidays

For anyone that was wondering, Christmas is celebrated in China...sort of. Although you'll be hard pressed to find anyone walking walking around in a big red Santa suit, trees are strung with lights, stores have Christmas season discounts, and in many bakeries, you can find Christmas themed deserts. That being said, Christmas in China is largely a commercial holiday, probably practiced for the sake of the international population, but in reality, having little meaning to anyone else. If I were to guess, I would say that this is the situation in a lot of non-Christian/religious countries in the world. However, this doesn't mean that you won't be able to enjoy your holidays abroad, it's just that you may have to make a bit more of an effort or think a little more outside of the box. Here are a few suggestions.

One of the best ways to preserve your American holiday spirit abroad is through food. Let’s be real, other than gift-giving at Christmas, it’s at the center of every family party. Whether it’s turkey and mashed potatoes at Thanksgiving or a Christmas ham, every holiday has it's own menu and every family has their own recipes. You may not be able to be with your own family in the comfort of your own home, but sitting around a table and enjoying the flavors of home with your new study abroad friends and family, although not the same, is a great substitute.

And don’t forget, cooking holiday dinner can be just as important to your experience as eating it. For our CET Thanksgiving, all CET students participated in a student organized week of shopping, prep, and cooking. It helps foster friendships, and knowing that you all pitched in will make dinner time even better. Not to mention you can include your family’s favorite dish on the menu if you’d like. 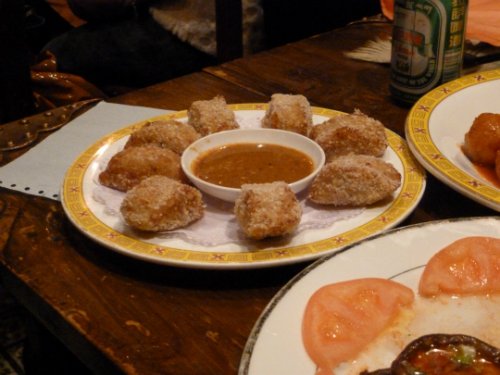 I’m not trying to counter my last point, but in my mind, it’s not so much the food as it is everyone gathering to eat together that's the true meaning of a holiday dinner. And seeing as you’re abroad, why not take this opportunity to either experience what the locals eat during the holidays, or to have a good meal with friends that isn’t influenced by the holidays at all?

This past Christmas, my friends and I ate dinner at Chinese hot pot restaurant on Christmas Eve, and at a Tibetan “steakhouse” on Christmas Day. While Christmas may not hold the same meaning for the Chinese as it does for Americans, sitting with my friends in a traditional Tibetan restaurant decorated with Santa Clause flag pennant banners, eating Yak dumplings and drinking Tibetan beer, and watching Tibetan dancers sing and dance all around us made for a Christmas experience I won’t soon forget.

When I was younger, one of our family traditions was to go look at different Christmas light displays in the nights before Christmas. For some people, it may be going to a Church service, for others ice-skating, and for many, I’m sure looking at Christmas light displays is also on the list. Go out and search for that Church service, that ice rink, or that light display. Even if it’s not quite the same, I guarantee falling back on old traditions will make you feel much more at home.

If you make friends from abroad who have never experienced an American holiday, this is a great opportunity to share some of your own culture with them.

Search Out The Most Untraditional Holiday Decorations and Festivities 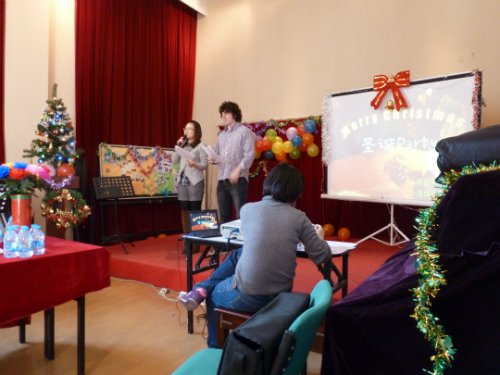 Like I said, In many countries, Christmas is a commercial holiday little meaning (in the way that Americans believe it does) to the local people that are celebrating it.  It doesn’t necessarily make it bad, and often times, it can produce some very interesting results.

I was recently invited to a Christmas party at a local community center in Beijing. Other than the decorations and the name, the party didn’t have much to do with Christmas. It was basically a 2 hour line-up of people singing songs and performing skits on a stage, all in the name of Christmas, but having nothing to do with Christmas. One woman did Zumba for a few minutes, a toddler recited the English ABC’s, someone recited a poem about working hard and achieving academic success, etc. In the end, meaningful or not, you have to appreciate their effort, and it was still a good time.

Language differences can also make for some interesting Christmas time fun. There’s a giant purple and pink fluorescent light Christmas tree outside my subway station that reads “Lucky Christmas”. It makes me laugh every time I see it. You may not be able to find that perfect light display, but you can have just as much fun going around with your friends and seeing what weird variations of holiday decorations you can find.

Look at the positives

As hard as it is, realizing that you won’t be able to spend that one particular holiday with your family but still making the most of it with the people you are with, is the best way to combat any feelings of holiday homesickness.

Even if Christmas doesn’t have much of a meaning to the people in the country in which you’re studying abroad, go and seek out your own meaning, whether it’s influenced by American culture, foreign culture, or both.