If you’re currently abroad, up until this point I would imagine you've been having an awesome time. You love your new country, you’re meeting tons of new people, trying new foods, buying new clothes, maybe even traveling a bit, and you’ve essentially lived without a care in the world. Unfortunately, in a short amount of time, the euphoria will dwindle, and you will start feeling the effects of culture shock. You’ll start missing America, you’ll begin noticing certain cultural differences annoy you, and you become generally more frustrated when things don’t go your way. It’s not a negative thing, it legit happens to everyone.

Believe it or not, this is actually one of the best parts about studying abroad. Hear me out. At this point,  in the beginning stages of culture shock, you can either curl up in a ball hibernating in your dorm room on Skype with people back home 24/7, or, you can experience the true benefits of studying abroad and not only survive, but thrive in a new environment. I call it the process of accepting and adapting, and it's what allows us to move forward and actually enjoy being abroad. I know this is always easier said than done, so I’ve made a list of 10 situations I’ve either accepted or adapted to so you can have a better understanding of what I mean.

5 Situations I've Accepted As They Are

Clothes can be worn more than twice

People here don’t have a lot of clothes to begin with, and coupled with the fact that doing laundry is inconvenient, just about everyone wears the same clothing or outfit at least 2 times a week or more. Because people here don’t judge you for it, there’s no reason you can’t do it to. You’re clothes may smell a bit, but everything here smells so you’ll blend right in.

There's no standard for cleanliness 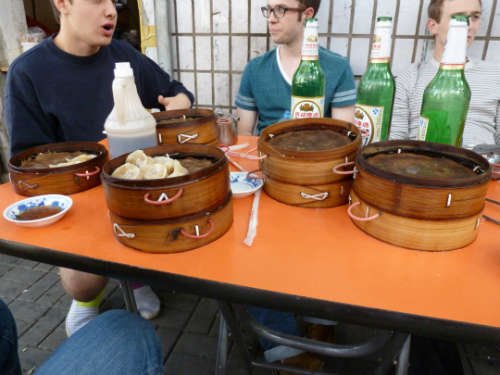 A lot of the smaller restaurants (e.g. dumpling restaurants) I eat at have an open front which means flys, smoke, and sewage smells are constantly surrounding me. As far as eating utensils go, at places like these, chopsticks and soy sauce bowls are plastic and reusable, however, half the time I’m pretty sure they were just wiped down with a wet napkin, not actually cleaned. You get to a point when you realize that as unclean as it may seem, your options are eat, or not eat. And once you decide to eat, you'll realize the fact that you can eat 30 dumplings for $2.00 is way more important than the fact that the restaurant you're at is a bit on the grimy side.

Beijing has a traffic problem

This is a very well known phenomenon. Beijing has traffic lights, sidewalks, and cross walks, but they have little to no meaning. Cars don’t particularly like to stop for you when you want to cross the street, and if you get in their way, honking is their preferred method of showing their anger. This is just the way it is and getting angry when someone honks or almost hits you won’t help at all. I’ve accepted the fact that transportation problems exist, and instead of freaking out, I’ve adopted the local mentality that if cars don’t have to follow traffic laws, as a pedestrian, neither do I.

There is a scent of sewage every 100 yards or so

It’s true. There are some rather nasty smells permeating the Beijing air. Sewage, exhaust, stinky tofu, and many more. This turns a lot of people off, but I’ve come to accept it, and at the same time realize that for every bad smell in Beijing, there’s also a new, interesting, or pleasant smell. My conclusion is that it’s better to have both the good and the bad smells, as opposed to no smells at all.

Western style toilets exist over here in Beijing, but not everywhere. What I’ll call an “Eastern style” toilet is essentially a urinal-esque toilet in the ground, and if you have to go, you squat and try to protect your pants as much as possible. It sounds uncomfortable, not to mention unclean, but again, your choices are go to the bathroom, or don’t. Your choice is a lot easier if you can accept that, although it’s uncomfortable and possibly not the cleanest thing in the world, you’ll still live.

Apparently dryers in general aren’t common in Beijing, and although I’m thankful for the few we have here at CET, they do a pretty lousy job. What did I do? Took my 50 foot Ethernet chord that I wasn’t actually using for my computer and strung it back and forth a few times between a curtain rod and the hanger rod in my closet. There you go, an instant clothesline. The alternative? You either don’t wash your clothes or your clothes stay wet.

I can’t drink water from the tap. 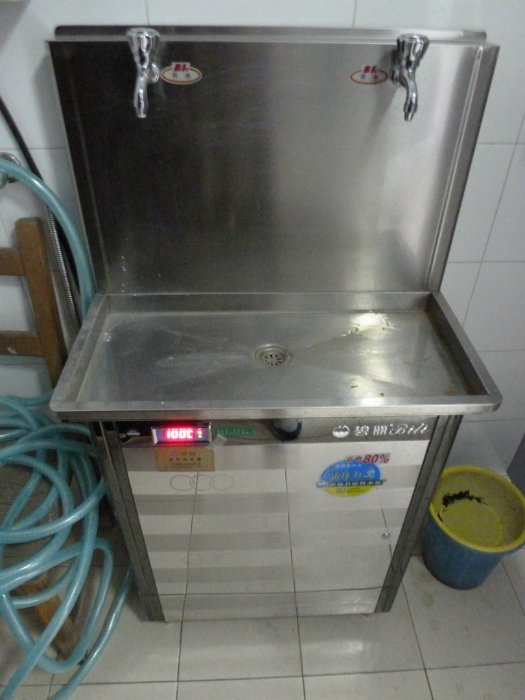 You can’t drink water from the tap here in Beijing (general rule for everyone, not just Americans), and if I don’t want to be buying bottled water all the time (which is still really cheap), I have to get my water from a boiling machine (that thing over on the right). A lot of people get annoyed at having to wait for the water to cool, but I took advantage of the fact that I had a permanent source of instant boiling water, and now make instant coffee, tea, or the Chinese version of Ramen Noodles in just a few seconds.

I didn’t bring a ton of stuff over to China, but my room is still pretty crowded. Instead of unloading everything I brought so that I had zero space in my room, I took things like winter jackets, sweaters, wool socks, i.e. anything I won’t be needing immediately as it’s still summer, put in back into my suitcases and in turn put those under my bed. Instant storage.

Providing your own toilet paper

This one actually covers a few different issues at once. Basically, there are a lot of situations I need to prepare for when I leave my campus, e.g most public places don't have toilet paper, I can technically be stopped at any time by an official and asked to provide my passport (or a copy), etc. It sounds nerdy, but because I didn’t want to remember to always bring 11 different things with me every time I left my room, I created a little travel pack (just a big Ziploc) that has everything I might need when I head out of CET, e.g. a pack of tissues (toilet paper), a copy of my passport, written directions in Chinese on how to get back to my school if I take a cab (and the driver can’t speak English), a small notebook and pen, some extra cash, and a few other things. It’s always in my backpack (takes up very little space) and pretty much guarantees I won’t get stuck in sticky situations whether it be in the bathroom, a cab, or the police station.

All gyms are not created equal

As small as my gym at Holy Cross was, it provided everything I needed to work out, and it was free. Unfortunately, the gym here at CET isn’t really up to par, and I’d rather spend my money on something other than a gym membership at this point. I still want to avoid getting fat, however, so I go to a local park that has a few pull up bars and space to do body weight exercises. I won’t become the world’s strongest man this way, but I can keep in shape, get some fresh air, and chat it up with some local every now and then.

It’s these situations where you either "do" or "don't", move forward or hold yourself back, miss out on the benefits of studying abroad or have the time of your life. Your experience is what you make it, and if you're willing to have an open mind, making the most of your time abroad becomes more of an adventure and less of a chore.