...Poland's capital pressed on, and out of the rubble it's grown.

When walking past the cheerful orange castle, along the grand royal route, through the curvy medieval streets and next to the tall townhouses in Warsaw's Old Town neighborhood, everything seems to be perfect and just as it was many centuries ago. Part of that is due to the diligence of residents in ensuring that their town doesn't lose these rich and treasured relics of history. The other part is because most of the buildings and streets were completely rebuilt after WWII. Warsaw was devastated after German forces destroyed 85% of the city during the war, and the Old Town got the worst of it. But, reconstruction began immediately after the Germans left, and over the years was so extraordinarily and meticulously carried out that Warsaw's entire Historic Center was designated a World Heritage Site in 1980. Add to that the fact that it's not common for non-original structures to appear on the list, and it's an even greater testament to what an enormous accomplishment the rebuilding of Warsaw was.

Aerial view of modern-day Warsaw - this is a floor mural I stumbled upon: 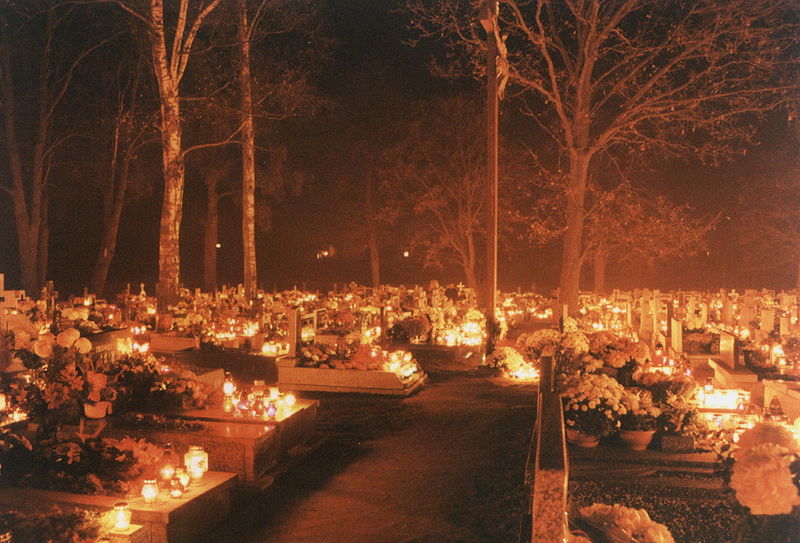 Over winter break in early January, I visited Warsaw for a weekend with my cousin who was visiting me. Despite flying in to Warsaw's airport and passing through its train station a couple of times before, this was my first time actually touring the city, so I wanted to try and get a good sampling of what Warsaw is all about. We were lucky to have warm weather (for winter) - warm enough that it was sprinkling for a short while - and, since it was still Christmas season, we also got to see a lot of beautiful lights and decorations. 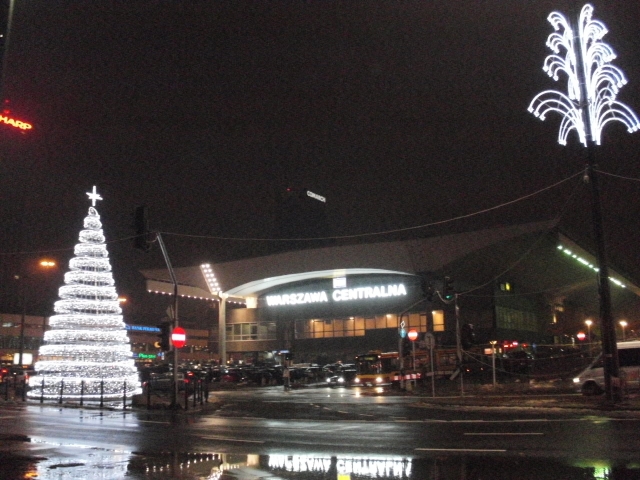 Unlike many capital cities, Warsaw is not the main tourist or cultural hub of Poland (my current home holds that title), but that doesn't mean it doesn't still have plenty to offer a visitor. It has its own unique vibe to it and, due to the newness of everything and numerous skyscrapers, it also felt kind of like an American city in that sense.

As the capital, Warsaw is home to many national offices, monuments, palaces, churches and museums, lots of which can be found along the Royal Route. There is one famous and iconic palace/museum that is not on that route though, and we stopped there on the first day to get a fabulous bird's eye view of the city from Poland's highest building.

The Palace of Culture and Science is a Communism-era complex from the 1950s that was modeled in part after the Empire State Building, which is obvious. It is controversial in Poland because of it being built by Stalin, but I must say that I liked it and enjoyed my time there and also loved its purple and gold lighting at night. With our ticket to the viewing floor, we also got to see an exhibit about evolution that had some cute critters at it, like lizards, frogs and camouflage bugs.

Palace of Culture and Science / Pałac Kultury i Nauki: 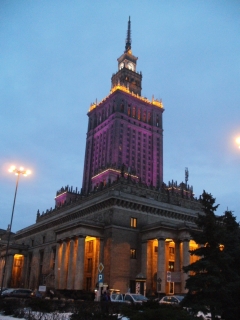 Waiting for our express elevator to take us waaaaay up: 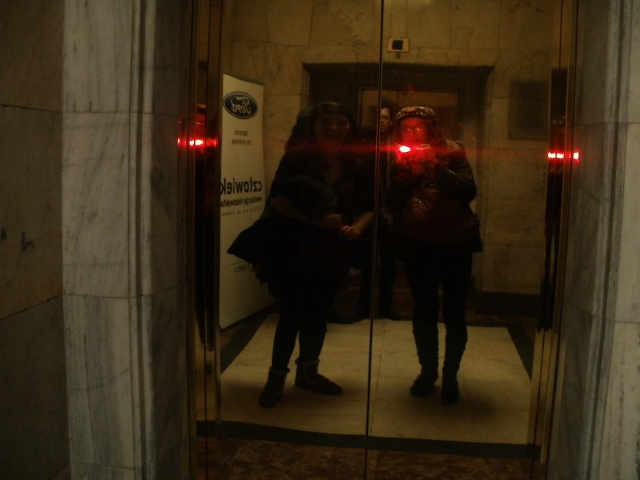 The view at dusk. Directly below is a large park with a skating rink: 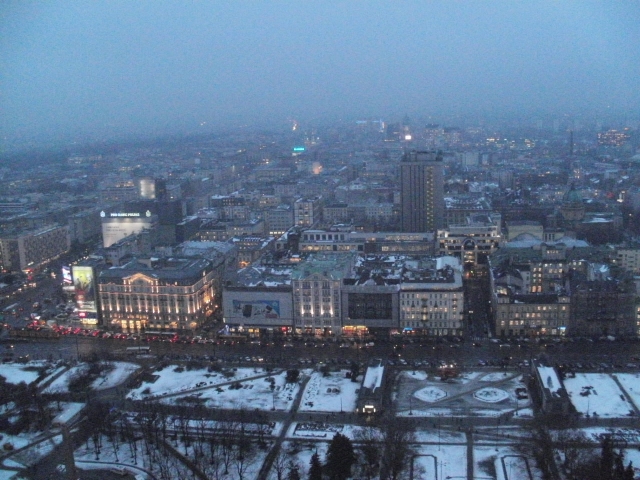 After we left the skyscraper, we headed towards old town via the royal route, which was, more than anywhere else in town, decked out in bright lights for the holidays, making it look extra, well, royal. Then we arrived in the old neighborhood and saw the castle and the two squares, as well as new town square in the adjacent neighborhood. This area is full of colorful townhouses that have been rebuilt to look almost exactly as they were when first built, which covered a span of several centuries from the 1200s on. Some even included any original pieces that could be salvaged after the war. The streets, stone town wall and other buildings have also been fixed, and besides the fact that everything is in prime shape, it all still has a quaint and serene old-world look and feel to it.

Royal Castle Square / Plac Zamku Królewskiego. The statue at the top of the column reportedly survived intact after crashing to the ground during the war. (This photo is thanks to Wikimedia Commons user Shalom Alechem):

We ended our first day with a tasty Thai dinner in Old Town...yes, Thai food may seem out of place after looking at the photo above, but my cousin did try some Polish cuisine too while she was here, and we had been craving Asian food all day, lol.

I'll be posting details of my second day in Warsaw this weekend!