...the whole scene, complete with three great goals, had me mesmerized.

On Saturday, I went to my first Polish soccer game - Cracovia vs. Lechia Gdansk - and had a blast!! I really should have gone to one a lot sooner, but was thinking the pricing for the top league (like in England) would be a lot worse, when in reality our tickets for good seats near one of the goals were only the equivalent of about $1.75 max per person!!! SO yeah, I want to try and go to all the home games now!! :-)

As a lifelong soccer fan and player, I had been eager to watch Polish soccer for awhile, but I also was curious about something else - what the notorious (and sometimes violent...) Polish soccer hooligans would be like - after all, they are among the wildest in Europe according to "legend", lol. Several were arrested recently for an incident at the Poland-Lithuania game, but that's not all that unusual at any big international match up. The "ardent supporter" section at the game I went to was not bad though. In fact, my friends and I purposely went over to join them because it looked like everyone was having fun, and were they ever!! They were quite friendly too, but then again we were cheering for the right team and wearing the correct colors (red and white). ;-)

The only thing semi-"rambunctious" going on was a lot of harsh taunting of the other team and their fans in some expletive-laden chants, but it was pretty funny because the main stadium announcer would always come on and start talking at the same time to try and drown them out or get them to stop (which is hard to do, hehe).

Those three great goals mentioned in the title were all scored by Cracovia, which made me extra happy since I of course was rooting for them, and they ended up taking home a win against a team ranked much higher than them in the Polish national league. It must have been the fans that helped them out ;-) ...and that fancy new stadium perhaps!

I can't wait to go to another game!! I also want to check out Wisla, Krakow's other team and the better of the two - Wisla is ranked #1 in Poland right now!!

Now here are some pics I snapped at the game. There was so much going on and so much energy in the house that I ended up taking tons!! 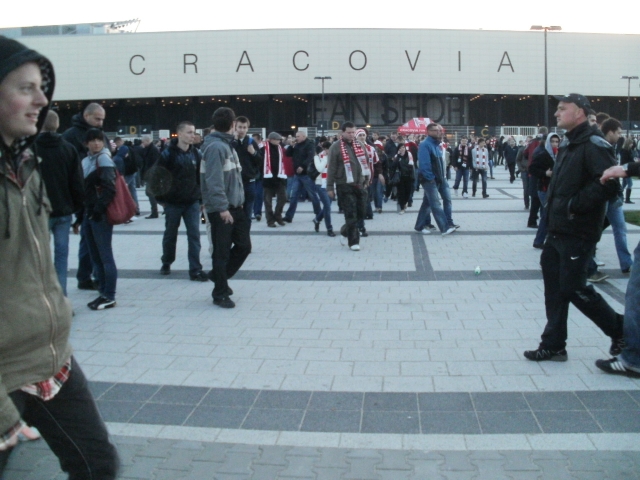 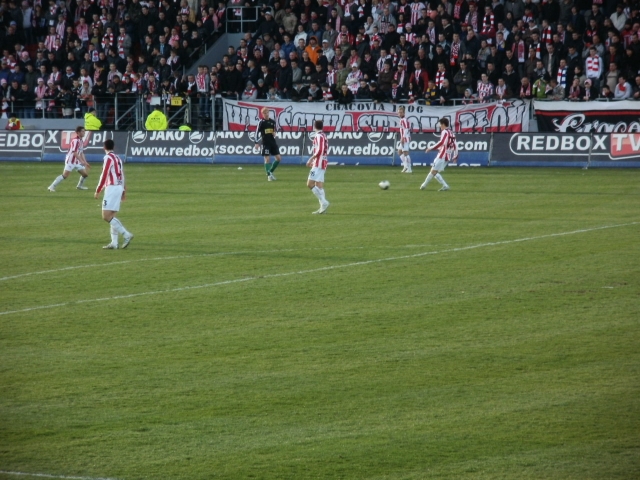 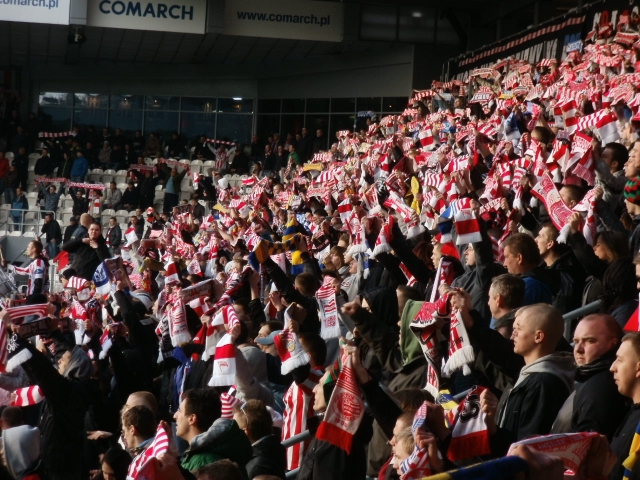 This play may have led to the 2nd goal: 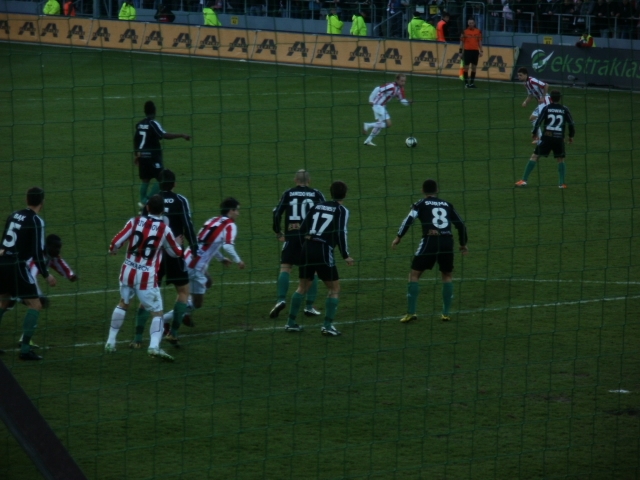 In our first set of seats before we moved closer to the hooligans ;-) I was already practicing getting crazy: 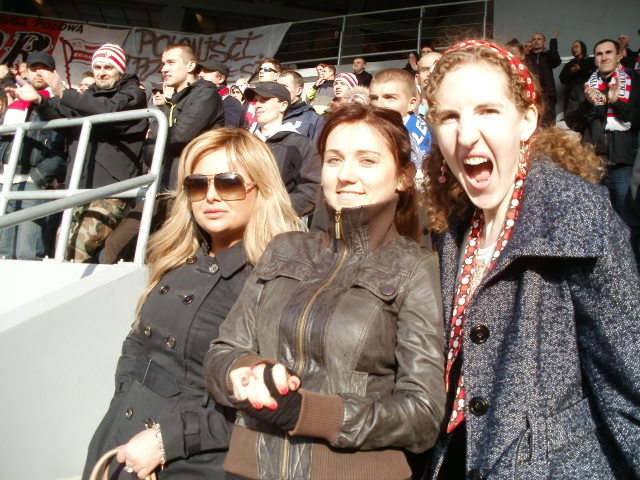 Man down! Luckily, he stood up shortly after this...he might have been fakin'  ;-D

A few of Cracovia's subs warming up: 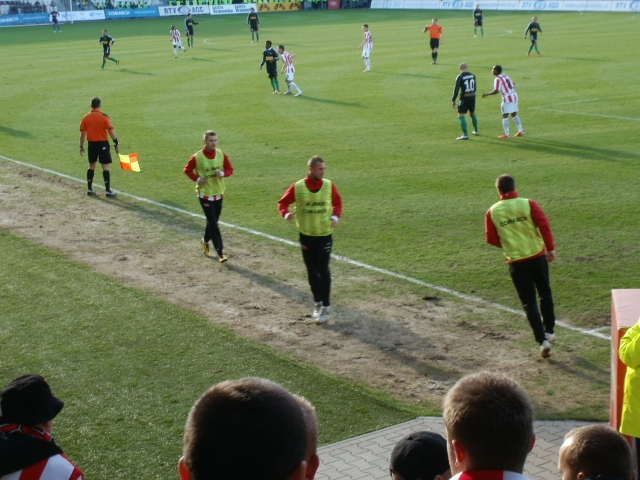 The rowdy section (which was tons of fun) had its own chant leader, drummers and conductor! Cracovia fans don't mess around! 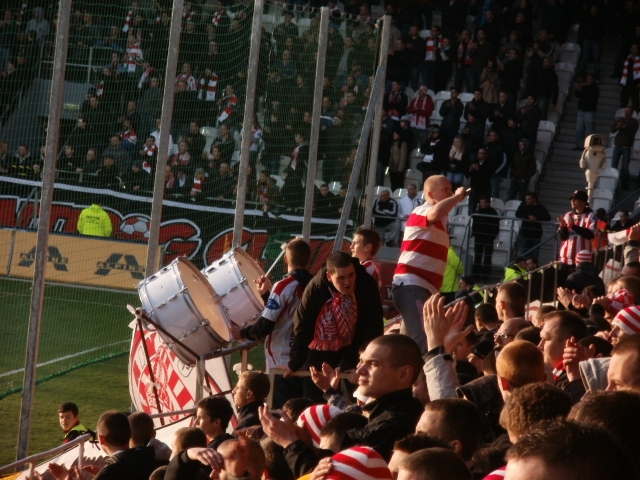 Free kick! Thankfully, Gdansk got nothing out of it: 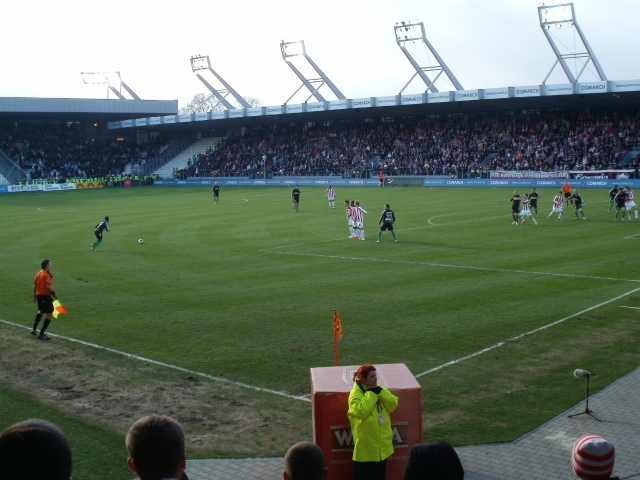 Throw in! And some bonding between the subs ;-D 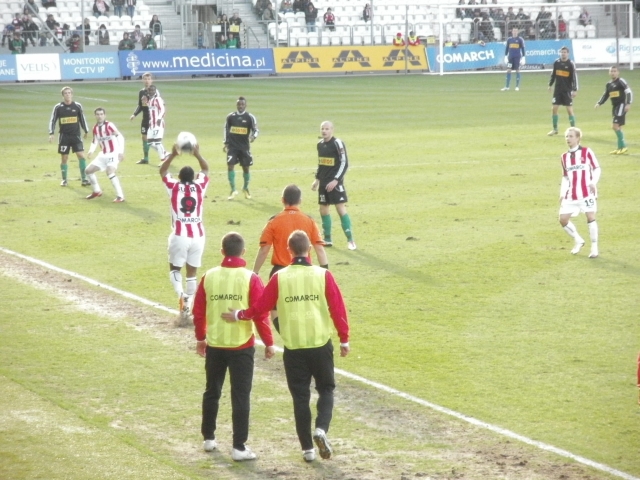 We were really getting into the game at this point... 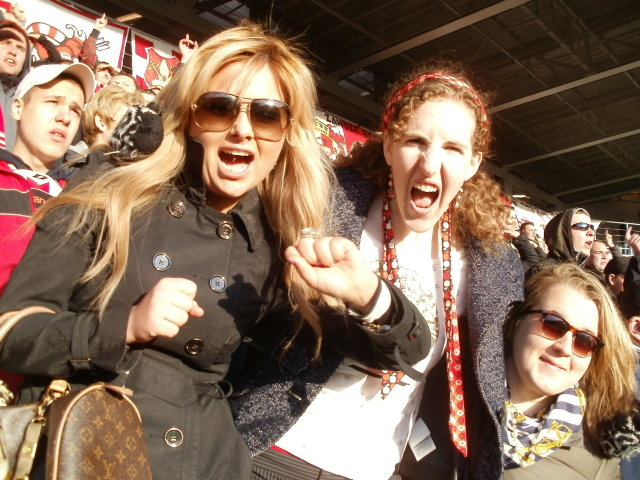 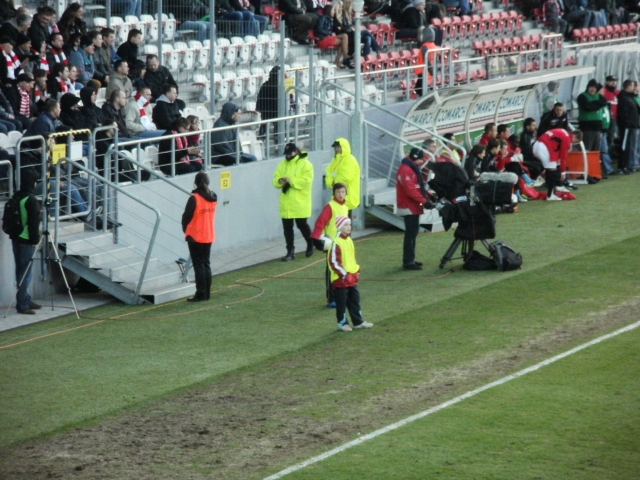 In these next two photos you can see the tight security around the Gdansk fan section - dozens of guards and two empty buffer sections (one on the right side as well that can't be seen). The only incident that happened over there was a firecracker that went off.

This shot also shows a stretcher being brought out for an injured Gdansk player that ended up being ok: 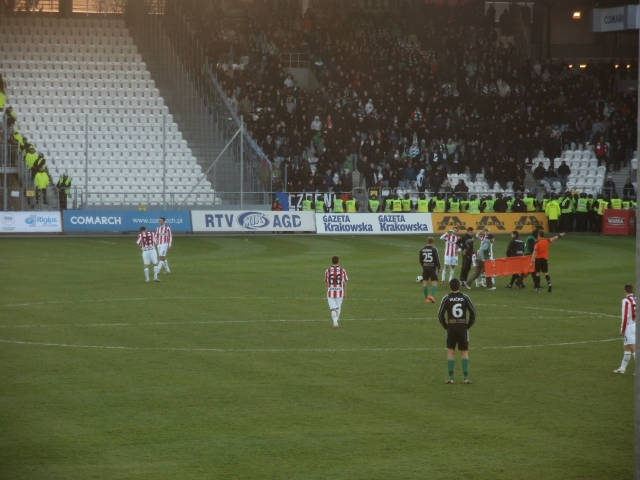 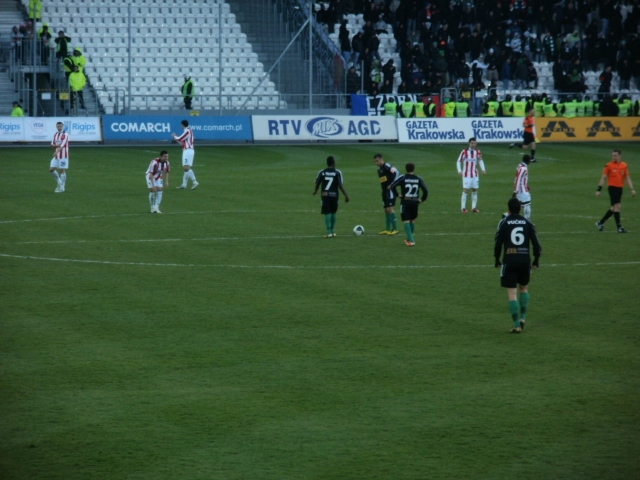 This was the standard form for just before a cheer that involved lots of clapping, lol: 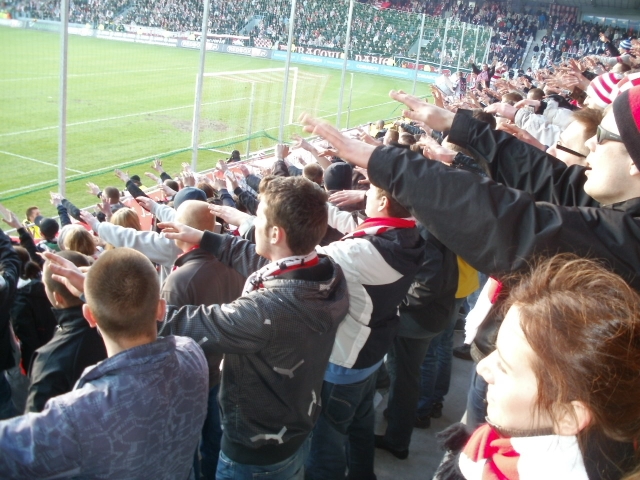 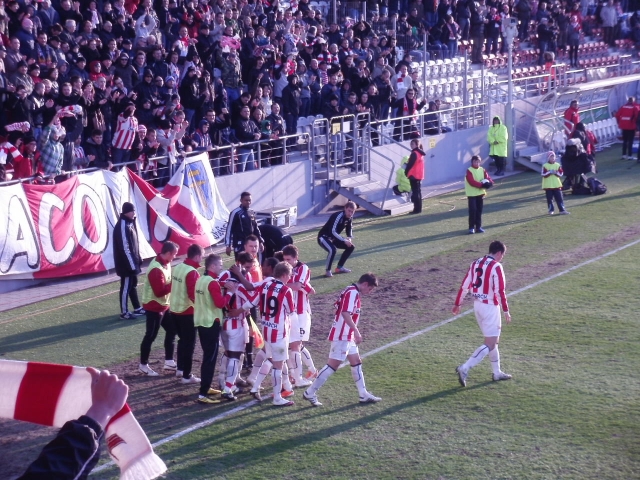 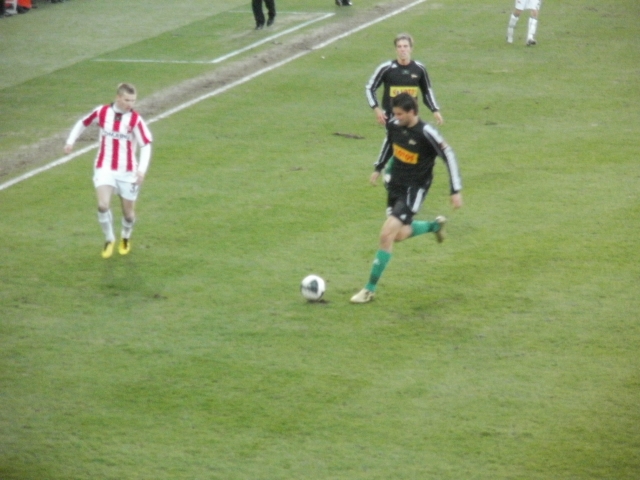 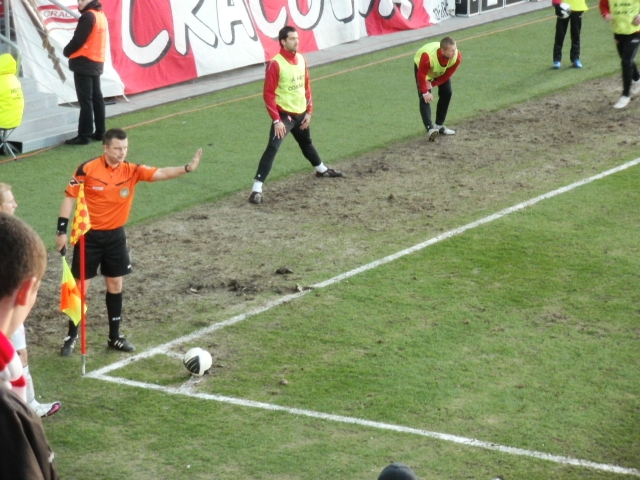 Fans uniting as Cracovia wraps up a winning game: 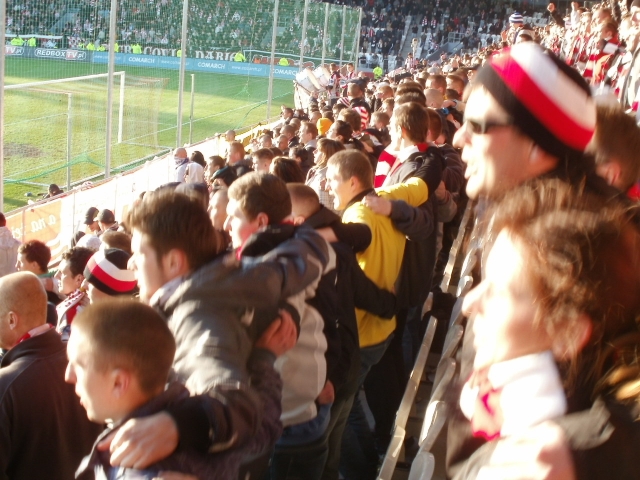 Cool shadows! The sun was shining brightly that day: 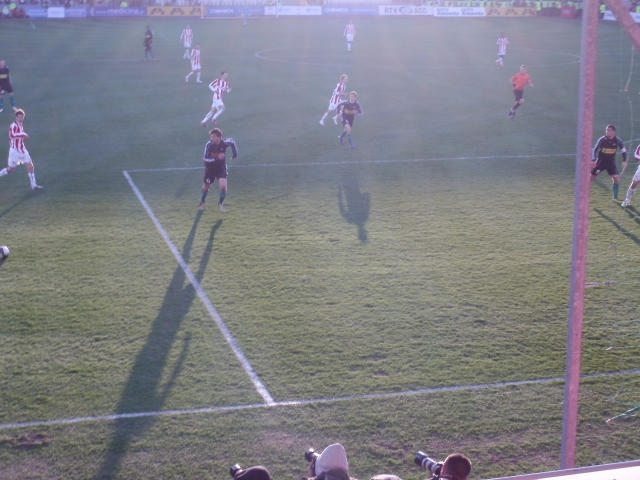 Players (and ball boys) thanking the fans after the game: 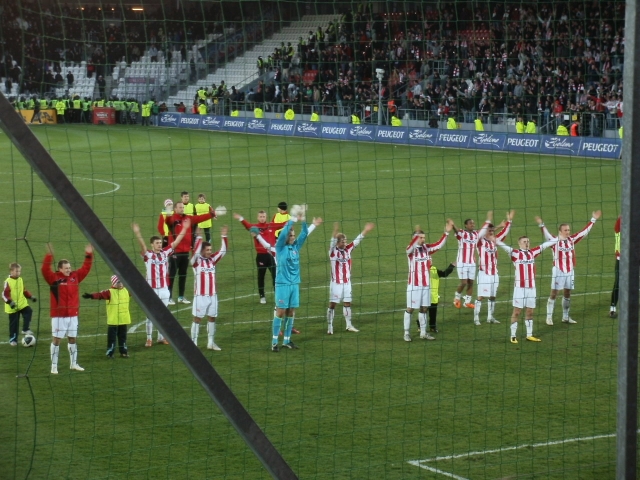 Some wild Cracovia supporter ;-) (my friend, Magda, exiting the stadium) 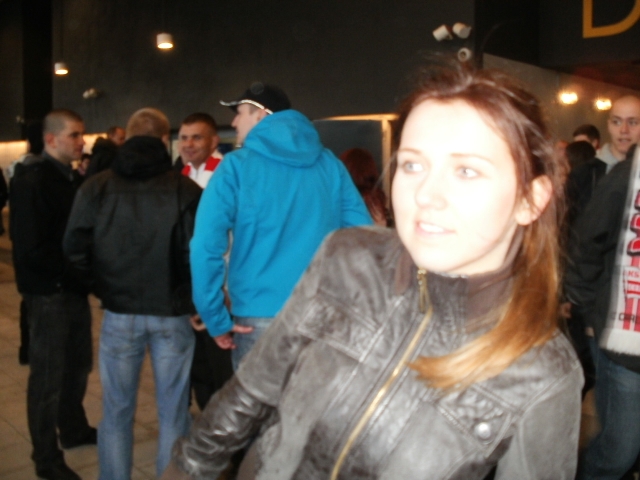 The most hardcore hooligans of them all, congregating outside the stadium after the game: 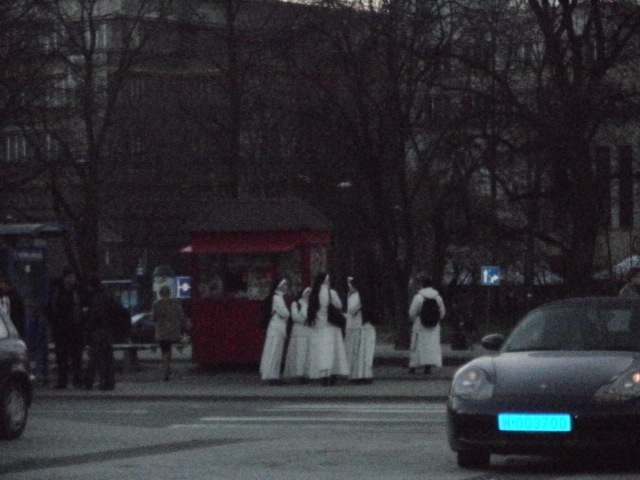 Post-game beverages at the always good Manzana in the Kazimierz neighborhood...mmm!! 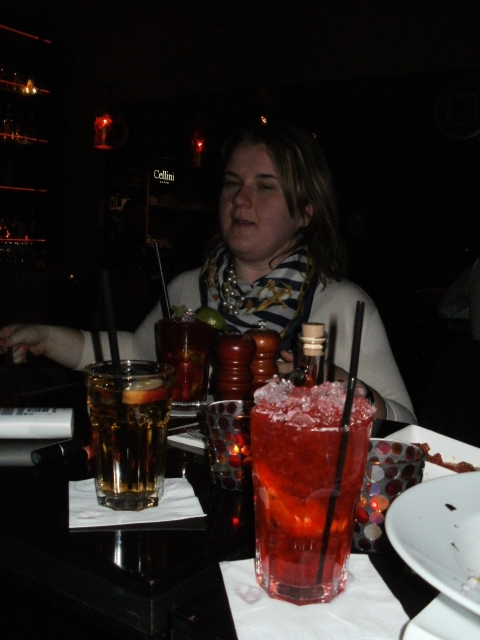 Funny Pigeon Pic time! This man certainly seems to love pigeons (and vice versa!) and was sweetly letting them eat bread from his hand, while standing on his lap: 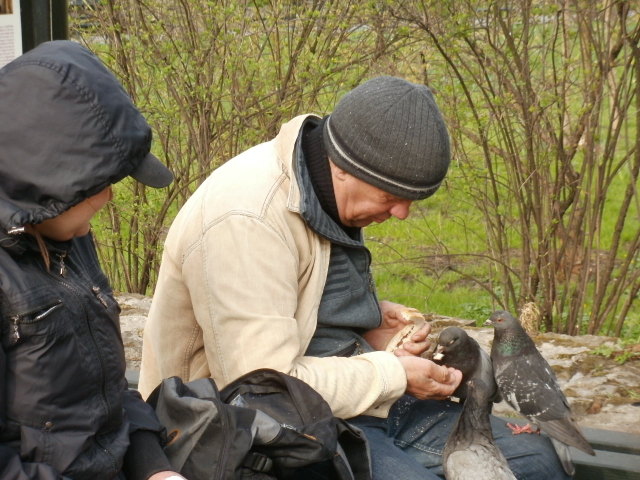 A wider shot shows that lots of pigeons were waiting for a chance to get fed! 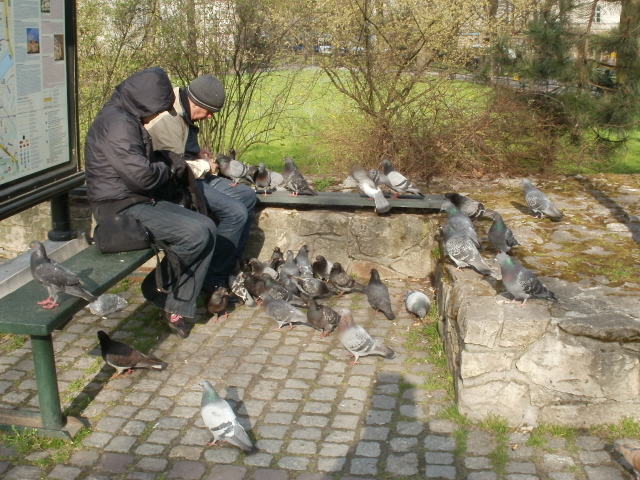 This coming weekend I will be visiting Krakow's big Easter market and am very excited about it!! I'll post about it here soon after!