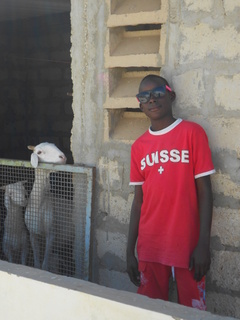 In Senegal, the majority of people are Muslim.  My family is Catholic, but I have seen many more mosques then churches and lambs roam the streets (there is a holiday in fall where every  Muslim family kills lamb for dinner).  Though my family is Catholic, I am constantly reminded that I am in a Muslim country.  Since there is a mosque close to my house, I hear the "call to prayer" especially loud at 5 am (1/5 times a day) along with the crying lambs that our neighbors have upstairs...I am NOT in New Jersey anymore. One of the most moving experiences I have had here was when I was walking to get lunch with my friends around two pm last Friday.  As we walked down the street we noticed that people in the streets, on the sidewalk and in grass were praying on rugs on the ground. It was like the whole country dropped everything they were doing to pray at that very moment. It was quite an experience walking through the streets seeing everyone deep in prayer.  I was also told that African Muslims are "far on the left" and tend to bend the rules sometimes. For example, many Muslims are not supposed to drink alcohol, but many young Muslim men drink privately with their friends or in their house.

In Africa, soccer or futbol, is HUGE. Most children start playing soccer at a young age in hopes of becoming soccer superstars like the ones they see on tv representing their country.  Everywhere I go people are playing soccer: on the beach, on a quiet street, in a field...no wonder why everyone is so fit in this country.  It was exciting to be here for the African World Cup to see how crazed both men and women off all ages became! When i was watching the Senegal game with my host family, I practically felt like I was at the game myself with all of the action going on in the room.  My mom was cursing something in Wolof to the coach, my sister cheered in french and my three brothers threw there hands up in the hair and jumped around the room whenever something exciting happened. Unfortunately, Senegal lost the Africa World Cup this year but watching a soccer game with my family was definitely a great cultural experience.

This year is also an interesting time to be in Dakar, because we are in the midst of a historical presidential election.  (February 26th=election day) The current President, Abdoulaye Wade, has been under fire recently by the public for corruption, nepotism and constraining of civil liberties.   He also changed the constitution so that he could serve for a longer period of time. Wade is now in his 80's and the people of Senegal feel that he simply does not care about the well being of the country and that he only cares for himself.  When the ballot was released this past weekend riots and protests broke out (in the most peaceful country in West Africa) and we were warned to stay with our host families this week.  Nearly every person I have spoken to has extremely strong feelings against Wade, including thousands of local rap groups that emerged over a decade ago, making Dakar a city that The New York Times calls "the most musically vibrant cities in Africa" and that "the crop of new talents is ripe for discovery."  These rap groups have had an extremely influential role in politics here in Dakar, whether it is to get people to get out and vote or get people talking about political issues and their rights as citizens. I love being here for such a momentous time in Senegalese history!

More on the music of Senegal to come! and pictures!