You know how when you're really excited for something, it seems to take FOREVER to finally happen? Yeah, well, when you're about to leave for two years and trying to squeeze a whole apartment into a single bedroom at the parentals house, that date of departure seems to sneak up much quicker. Don't get me wrong - I'm beyond excited for this lil' adventure of mine that I'm about to embark on, but I just hope I'll be all set to go by next week...aaah!!
So, how exactly do you downsize your life and your belongings, first to one bedroom, and second to a couple of suitcases? Umm, I'm still really not sure, so if anyone knows, please let me know!
It has been verrry tricky trying to decide what to bring along with me to Poland, and even trickier yet trying to get rid of stuff so that the bedroom at my parent's house doesn't burst at the seams while I'm gone. You see, I really, really like clothes. And shoes. And jewelry. And belts. And purses...ok, you get the idea. And now you might see why it's so hard to figure out just how the heck I'm supposed to pick which items to bring with, which to jam into the closet and which to part with altogether via Craigslist (my car), Goodwill or the like.
Then there's the financial side of things, and I won't go into all the boring details, but it does involve calling credit cards and banks to let them know that, no, despite what it may look like next week, my card has not been stolen by some thief drifting through Europe, but that indeed the shady drifter is me. :-)
Here's another Minneapolis photo before I depart. It's of the beautiful Lake Harriet and my family's precious pup, Mickey. I'll miss him! 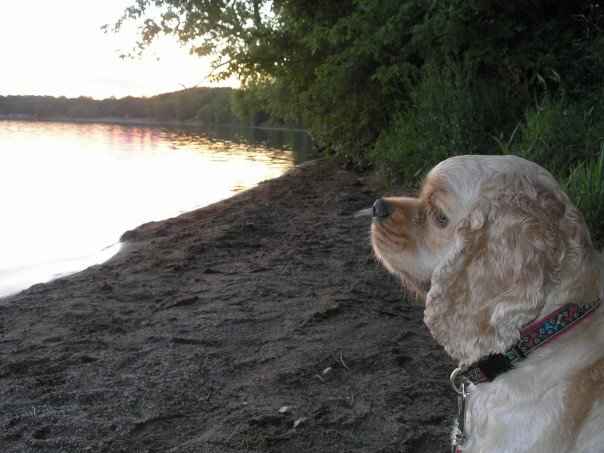 Another preparation for life in Poland has been learning to speak some Polish, which I desperately hope gets better when I'm immersed in it. Luckily, my program is all in English though - otherwise I'd fail out the very first day!

So, September 29th is the big day! First, I'll head to the "Land of Fire and Ice", Iceland, for a couple of nights before continuing on to Warsaw to catch a train to Krakow. I've always wanted to go to Iceland, and since their capital city, Reykjavik, has a nonstop flight from Minneapolis and then to Warsaw, it seemed like a good time to go. I plan on scoping out the city one day and checking out some cool geysers, waterfalls and other fiery and icy marvels the next day.

I'll check in again after I've arrived, and my posts will get more frequent after that. I can't wait to share this whole experience with all of you! But first I just have to somehow get everything done here by Wednesday evening and without forgetting anything...