Over the last week we picked our design team members, invited each one to an introductory meeting and began to map out our plans for developing the Innovation Proposal by the end of this week.  Kate and I have a team of five women from all around our small cocoa farming village who we have chosen because each one has demonstrated a drive and ability to accrue an income outside of cocoa.  We wanted a group of women who we knew would be committed, interested, have enough time to spare, and also have the expertise in other forms of enterprise that will help us create a lasting innovation.  I am excited to see the many personalities, differing backgrounds and many ideas come together to create something new and I feel privileged to have the chance to work alongside them.  Even though more than half of our last meeting went right over our heads as we waited for a translation, we are already seeing more of each woman’s personality and interests as we work through understanding the assets and resources of Kwame Dwaa.

Other than the excitement of getting deeper into Inspiration, we somehow managed to find some time to head down to Cape Coast for a weekend of reflecting, relaxing and immersing ourselves in yet another aspect of Ghana’s culture and history: the Elmina and Cape Coast Castles.  Both castles were used as ports for the movement and sale of millions of slaves during the transatlantic slave trade and it was an eerie feeling to walk through passages where so many people had died.  Ever since I was in Elementary school I’ve been taught over and over about the slave trade but actually seeing the castles and hearing about the number of people who passed through each cell and door was almost surreal.  I came away thinking of how different our world is today where we can not only walk freely back from the door of no return but also come back to Kwame Dwaa and work alongside people whom the West has influenced in so many negative ways.  Despite the fact that our world is still far from perfect or just or fair, it gives me hope knowing that what we are doing today, living and working alongside the people of Ghana, could never have happened a few hundred years ago. 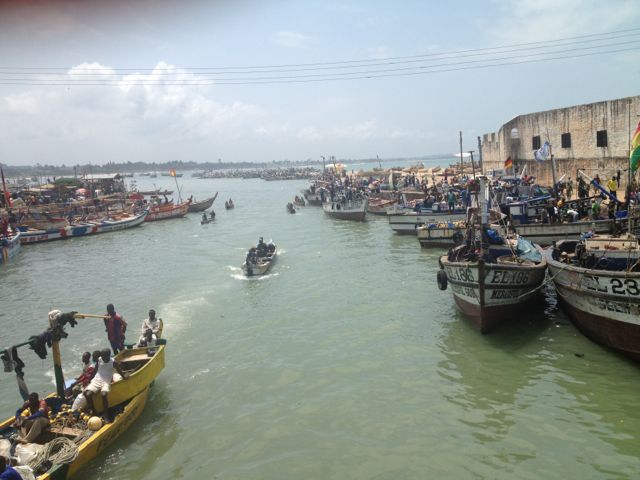 Even though we know that we aren’t here to “help” or provide charity, it can be difficult to explain what we’re doing without falling back on those common phrases.  This weekend I heard a girl we met thanking us for what we’re doing and it made me uncomfortable because I wanted to explain to her that we aren’t doing anything to be thanked for.  We’re learning just as much from the people of Kwame Dwa as much as they ever could learn from us and I think that’s one of the best parts of social entrepreneurship; getting to share ideas on how to solve problems without creating an “us versus them” kind of mindset.  Having this opportunity to learn about another way of living and conversations about ways we can work together is a refreshing change of pace from the traditional charity mindset and I’m hoping that by the end of this time we’ll have some tangible way to show how what we’re doing is radically different and a positive force for change.

On a completely unrelated note, I wanted to end with a few fun facts about Ghanaian culture that make us keep our senses of humor even when we just might be getting served rat for dinner: