...and is only reminiscent of films and folklore.

Well, it's been a little longer since my last blog post because of getting behind from being gone on the islands of Malta, but I will at least be doing two posts about my journey! :-) I went for spring break with two of my friends from Krakow, Kamila and Anna. Malta very much impressed all of us, and I of course took hundreds...well maybe thousands, of pics, so another thing that took awhile was picking a relatively small selection of photos for the blog - shots that turned out ok and together portrayed best what I experienced on my Mediterranean getaway.

I actually took tons and tons of shots of just views down the streets - there were magnificent and curious, narrow lanes at every turn in Malta's villages and cities, and some of them were also dramatic and steep like the second pic below that was taken in the hilly capital of Valletta. I am always interested in the architecture that is unique to different places, and the cute, colorful rectangular window boxes that I saw all over the Maltese islands star in many of my photos.

A lot of the architectural styles seemed very Italian as well, but Malta is only 55 miles from Sicily, so that makes sense! From afar, the urban areas reminded me of Greece, with a sea of white/light buildings with balconies dominating the view. The landscape was a mixture of desert and tropics, with cacti and palms trees, succulent plants and tiny geckos all sharing the land. Oh, and there were also cats everywhere, but strays in Malta are well taken care of, as we were told, and it was noticeable by how healthy and clean most of them looked. I guess a new program is underway to spay and neuter some of them too. I loved having so many cats around though, as they are fun to snap pix of, haha, especially when they weren't shy!

This mixture of elements and the sheer beauty combined with thousands of years of human history on the islands gave the whole place a feel of being right inside an old fable or even a blockbuster movie. Despite having certain resemblances to other places, Malta was really like nowhere I had ever seen before, and I was happy about that!

The areas that my friends and I visited were Sliema (where we stayed for the first part of the trip), St. Julian's, the capital city of Valletta, Gzira and the former capital village of Mdina. The last few days were spent on the northern island of Gozo, one of Malta's three main/inhabited islands. I will be writing about that and posting photos from there in the post after this one. Since Malta is not a big place and everywhere can be accessed in no more than 2-3 hours, it makes getting around very simple, especially with the great public transit system.

I would love to go back to Malta again sometime very soon! It felt very homey and comfortable there while at the same time exotic and tropical. One of the official languages is English (along with Maltese), but English seems to dominate, so that made things nice and easy for me! The Euro is also used (Malta is in the European Union), and while I didn't necessarily like that because of the weaker dollar, it was something else familiar to me since I have used it several times before.

So, now that you have a bit of background on Malta, let's get to the photos! :-)

A bay and swimming pool in Sliema: 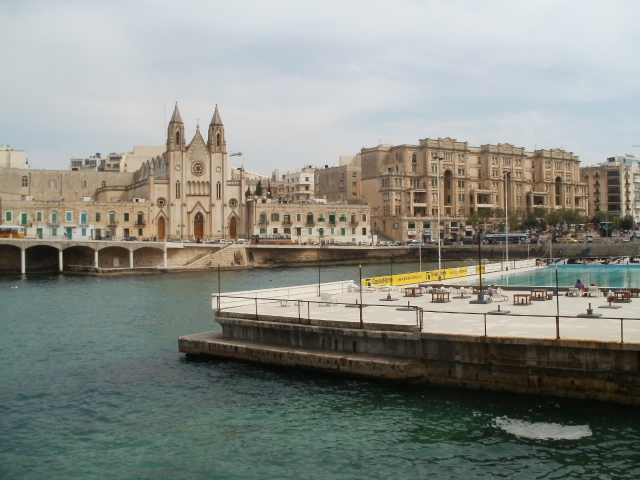 A typical street in downtown Valletta: 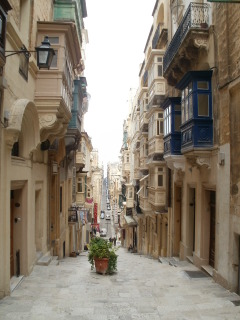 Scuba diving is common in the waters around Malta - three divers can be seen exiting the water in this pic: 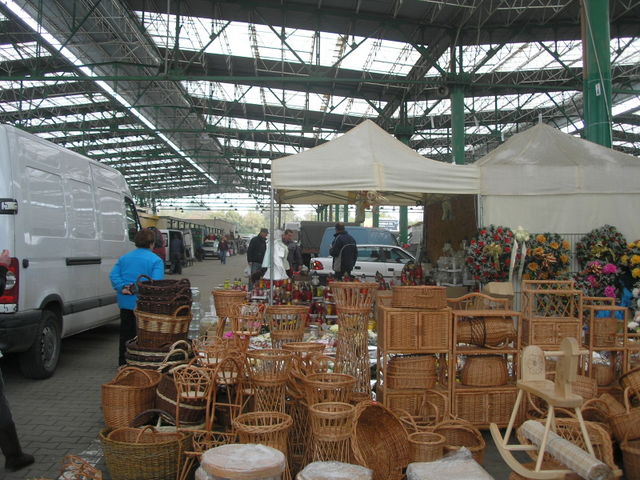 Our first meal in Malta - one of my fav foods, Maltese-style! St. Julian's boat-filled harbor is in the background: 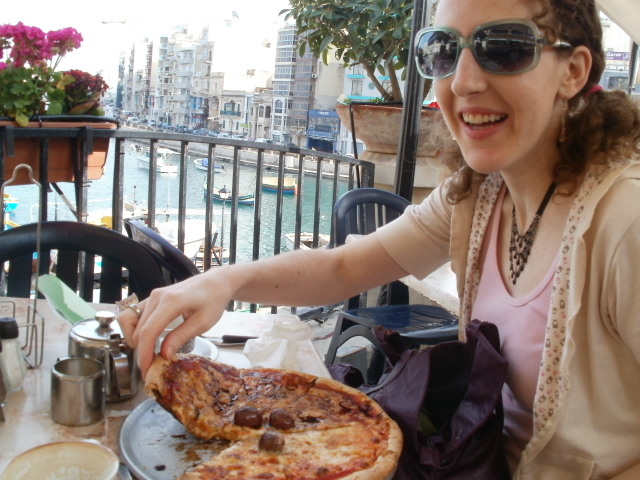 The setting sun shines on Valletta: 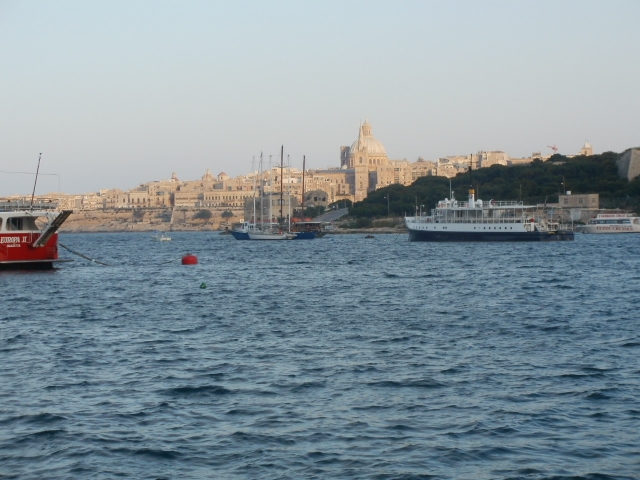 The horse carts in Malta seem to be from a whole different (older) era than in Krakow! We were saying how they looked straight out of the "Aladdin" movie, or something like that! 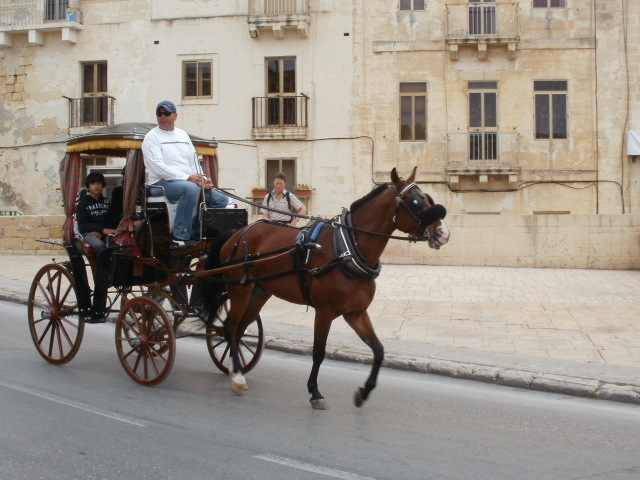 ...And a related sign only found in Malta...well, with a picture that looks like their "horse cabs" anyway, lol: 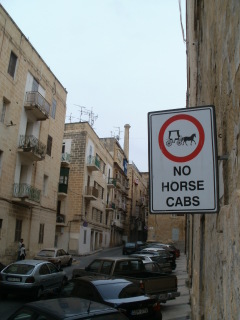 The three of us posing on a cannon in Mdina: 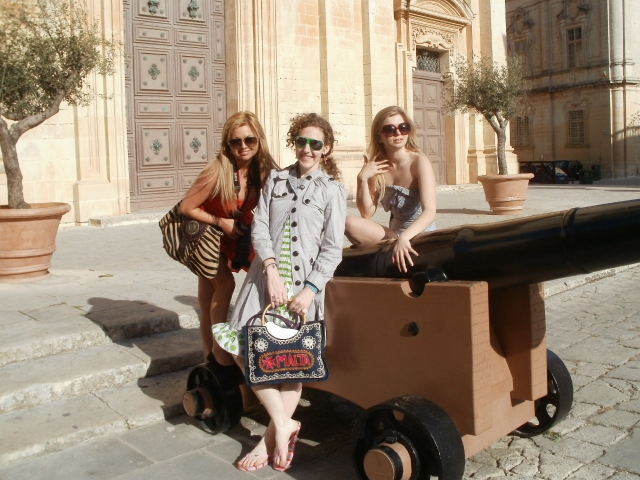 This very tame and photogenic kitty kat was a little supermodel and posing for me left and right, haha! S/he also had an interesting cropped tail:

Religious figures are a common sight on corners of buildings in Mdina and Valletta (Maltese people are predominantly Catholic). 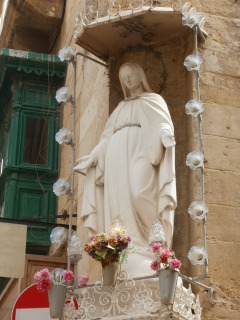 Giant bagels for celebrating the Easter season...perhaps called manarinu? I think I asked but don't remember what the person told me:

A British-style cab...but in bright yellow instead of black. Maybe a leftover from when Malta was part of the British Empire? The cabbie even has a matching tie! Check out the phone # too, lol. 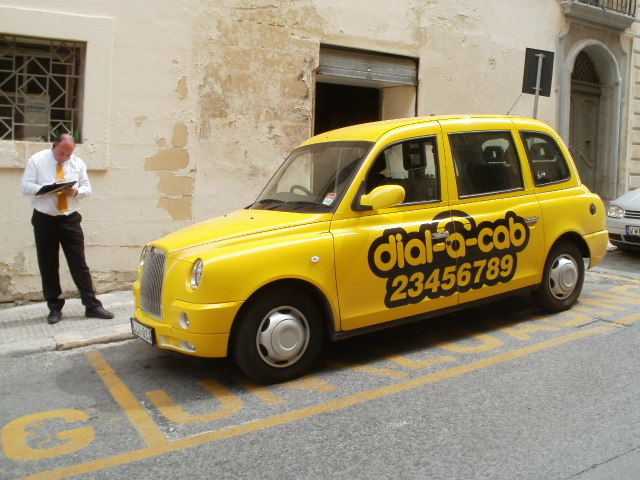 Me admiring the nifty seahorse doorknobs...I also like how the doorknobs are up high in Malta! Perfect for taller people! ;-) 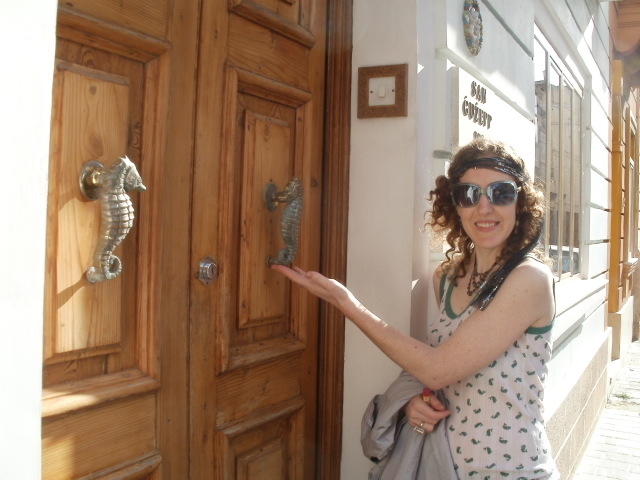 Lots of drivers awaited clients after out flight from Krakow...ours was in there somewhere! 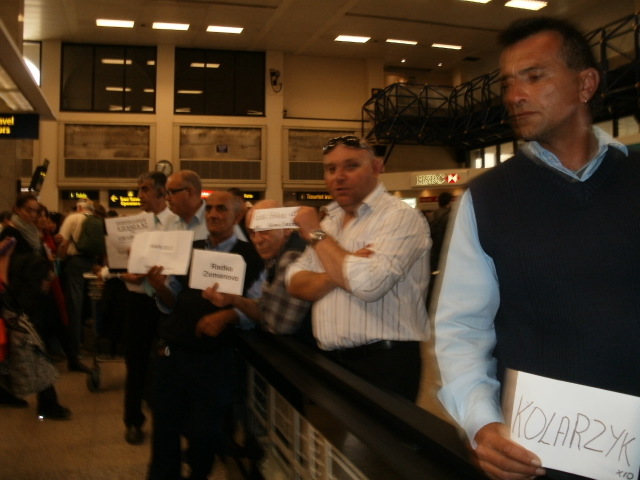 This tourist shop had a few out of the ordinary items for sale... 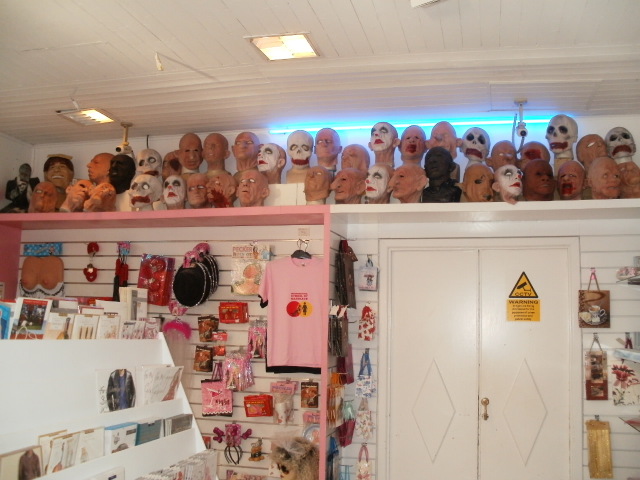 A super cool fountain in the center of the busy bus station in Valletta: 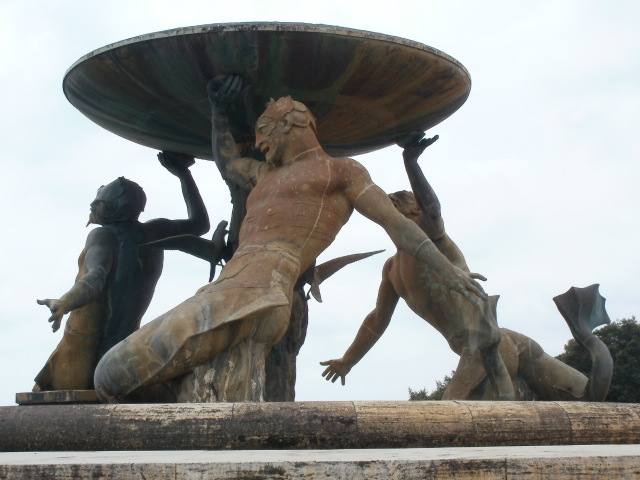 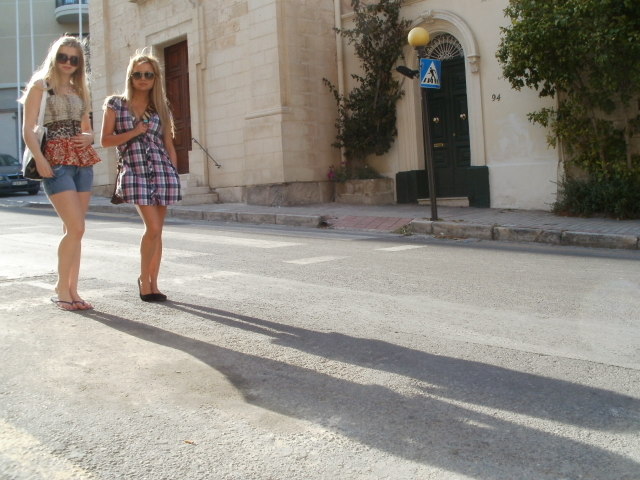 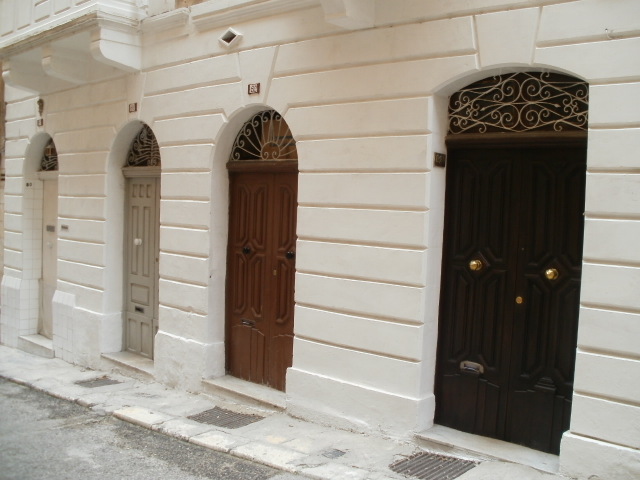 A message painted on the pavement in Sliema: 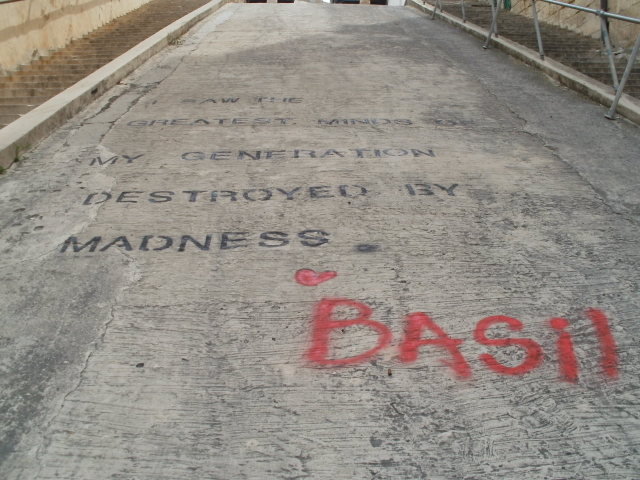 Since so many of the kitty kats we encountered seemed to have the same look and coloring as this one, we were convinced that the same cat had been following us all around town just to keep getting its picture taken... ;-) 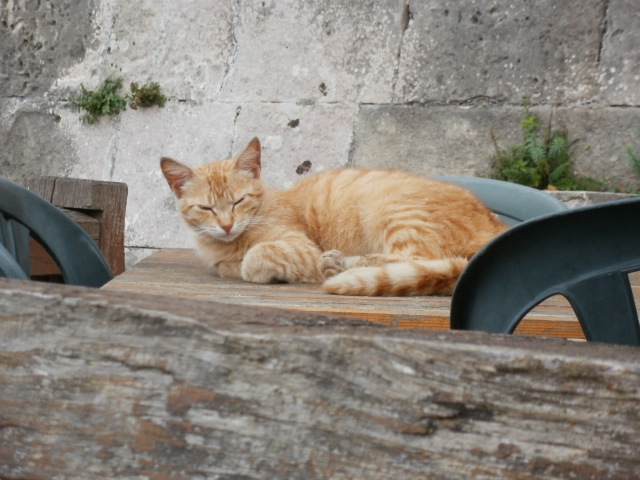 The Drawing setting on my camera picks up the details of one street (and Kamila and Anna!) in Sliema near our apartment: 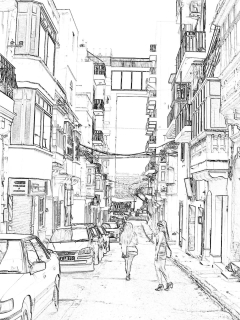 In Malta, the city buses are vintage-looking and painted gold, red and white. I liked the back of this one: 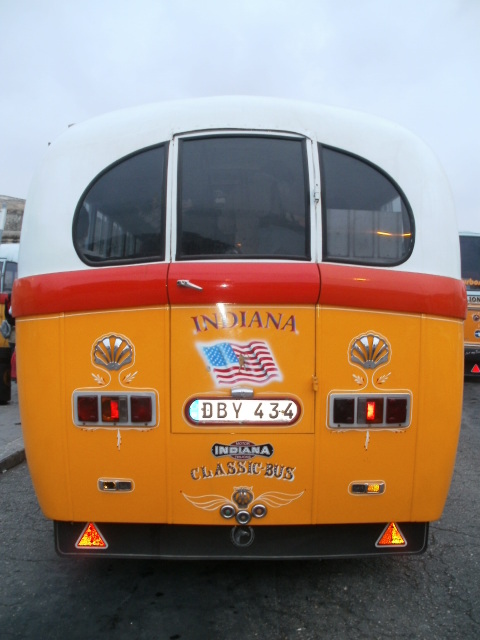 A bunch of super-sized window boxes! 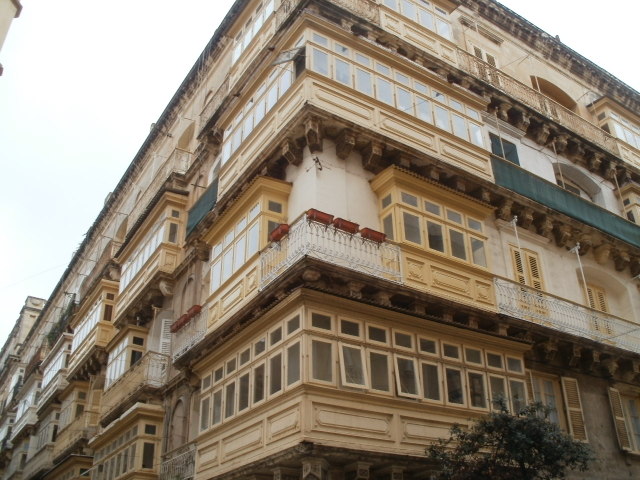 Rocks on the coast in mysterious shapes from wind and water wear: 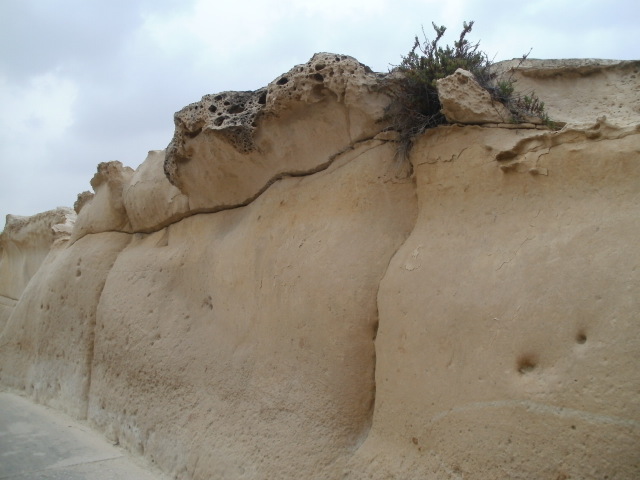 Mmmm a whole booklet full of various chocolate puddings to choose from...an Italian specialty I think since the menu seemed to be in Italian and the restaurant was also Italian: 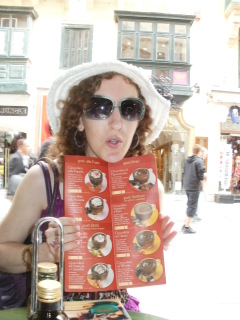 Gorgeous landscaping near some government buildings in Valletta: 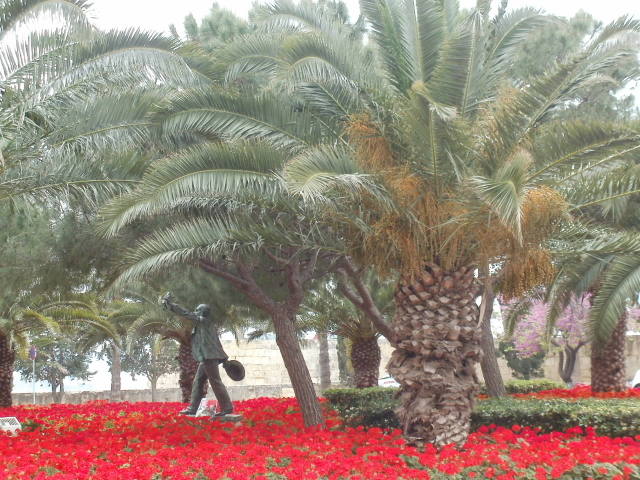 A toy shop in Gzira selling what else but Teletubbies and Hello Kitty! :-) 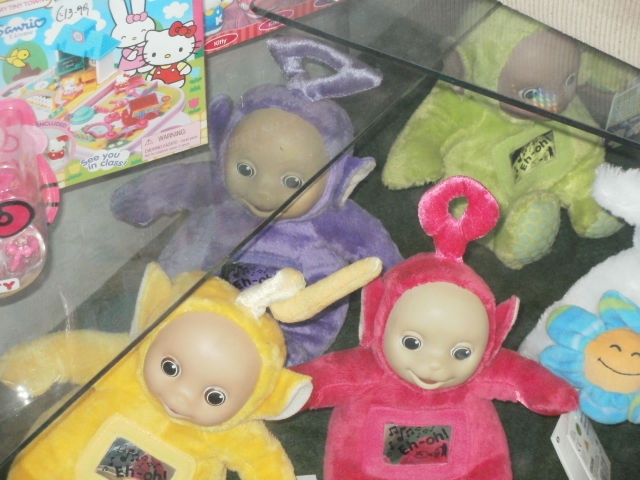 Funny (Maltese) Pigeon Pic time! This diverse trio of pigeons stumbled upon a very large "crumb" that they were sharing: 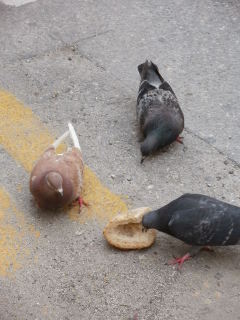 Hopefully these photos and my commentary gave a good feel for the parts of mainland Malta that I visited. It's always better in person though, and Malta is a place that I highly recommend! I'm just lucky it's only a couple of hours by plane from Krakow, and also accessible on budget-friendly RyanAir! In the next post, it's more about this fun adventure, but mainly the part spent on the quaint and peaceful island of Gozo...plus any extra, random photos that I find and want to include from throughout the whole trip! I'm sure I'll come across a few of those! ;-D