When I originally decided to do a post about autumn in Krakow, it still seemed very much like autumn here in the city, even if most of the leaves had already fallen and the colors faded. Temperatures were still just in the cool but not frigid range and the smell of damp leaves, which is a favorite of mine, was still lingering. But then all of a sudden, snow creeped into the forecast. It didn't amount to anything at first, but then it came in the form of sleet, and after that, real, true snowflakes. Continuing with this slow approach, it didn't stick to the ground for a few days, and then finally, after enough flakes fell and with colder temps, it stuck. And now it's everywhere. As a Minnesotan, you'd think I wouldn't mind or even notice this sort of thing. It's actually quite the opposite though. I've gotten rather sick of the white stuff after all these years of dealing with it. BUT, I will say that it looks very pretty and peaceful, especially in a medieval city during the Christmas season. AND, not having to drive in it makes it a lot less problematic.

So, after that wintry introduction, now it's time to get back to fall! Phew!

The Indian Summer I mentioned in the title is apparently a normal thing for Poland. So maybe that's why the school schedules are set up about a month later than American schools... Since the day I arrived, it was sunny and mild and generally very nice outside. As I talked about in a previous post, I was even able to enjoy lots of picnics - sitting in the grass and all, taking full advantage of the extended summer. The great weather also made sightseeing that much easier. :-)

Trees were still green when I first got here, so it really did seem summery. When they started to turn though, the best place to be was the Planty park. This is the park that runs around the entire Old Town area - it's where the city walls used to be, and turning that space into a park seems like it was the perfect plan to me! The park is full of trees that turn a warm golden tone, whose leaves then blanket the green grass with the same golden-colored hue, as can be seen in my photos below.

The sprawling and stately Wawel Castle looms in the background:

This giant tree is simply magnificent:

Not only is the Planty convenient to use for getting around town, but it's also the ideal place for observing a sampling of the culture and daily life of Krakow. Locals walk their dogs, kids play in the leaves, couples canoodle on the benches and students hurry off to school along the pathways (I am usually one of those...in a huge hurry!). The pretzel vendors that are a Krakovian staple also set up shop in certain areas of the park. Oh, and I can't forget those funny little pigeons. The pretzel vendors and pigeons also happen to be very resilient to cold weather, as they thankfully are all still around now. I had been wondering what would happen to them when winter came!

I had heard from many, many sources before my move that Krakow had famously gorgeous autumns, and I can assure you all that it's true! It's a fabulous time to be here, especially because the main tourist season has died down by then too.

There goes a pretzel cart!

There aren't any lovely leaves in this shot, but it does show the lovely weather and other lovely things, like the town hall tower and Bracka Street: ;-)

I also was able to celebrate two fall holidays that I love here (thank goodness!) - Halloween and Thanksgiving. Below is a photo from each one.

Me and my friends Kitty and Pete dressed up all "spookily"! (Photo thanks to Kitty)

The Thanksgiving spread, with me waving enthusiastically in the background. :-D (Photo thanks to my friend and this year's Thanksgiving hostess, Kam) 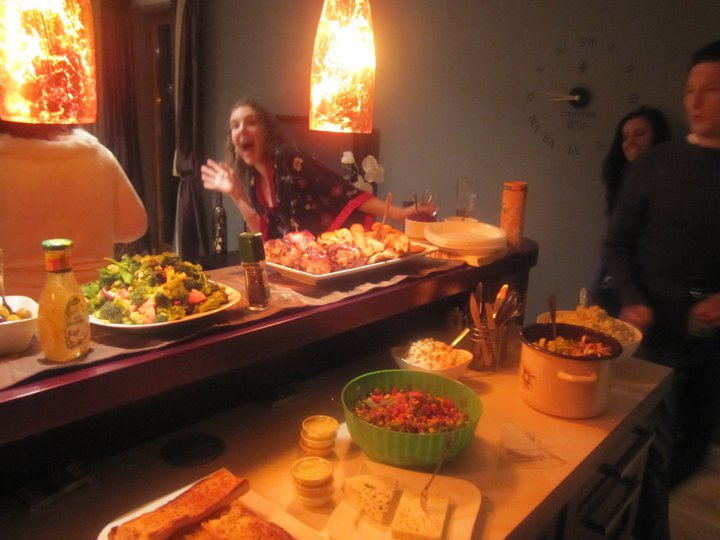 Well, it's time to go back to the wintry theme of the beginning of the post again. That's what it's all about here in Poland now. But the change of seasons can be exciting, even if I sometimes like to whine about winter. The smell of wet leaves has been replaced by the smell of wood fires, the trees and lawns have all turned a shimmering shade of white, the horse carriages now have nifty tops on them, and fuzzy gloves, funky hats, trendy boots and puffy parkas have come back out on the scene again.

And, best of all, the annual Christmas market in the Rynek just opened! More on that soon, as well as more on a Krakovian winter!