...and stepping off the train, Ukrainian culture was unfurled.

Over my Christmas break I did not go home to the US, but instead ended up visiting a few different places in this part of Europe - one of them being Ukraine. Something I really love about Europe is how an entirely different country and culture is only a short distance away.

Poland's border with Ukraine is only a few hours from Krakow by train, and on a train is also the easiest, quickest way to get past the border, as long lines can sometimes build up on the roadways. Since Poland is in the European Union and Ukraine is not, the border is actually still a real border (with stamps for passports and all - woohoo!), so that adds about an hour or so to the journey as officials board the train for exit and entrance checks. With that, the total travel time, to the city of L'viv, ends up being around six hours, but since it's an overnight train with beds that are in private compartments (for 2-3 people), the time flies because it's pretty easy to sleep.

L'viv's stately main train station with the city's name written in Ukrainian, which uses Cyrillic lettering. The building is Art Nouveau and from 1904: 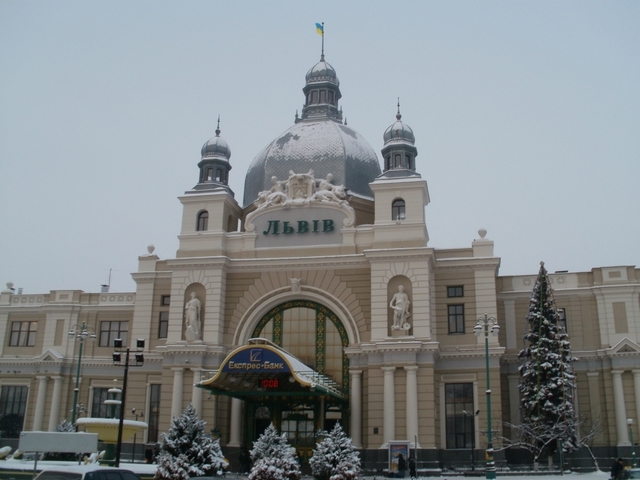 L'viv is known as being a coffee-obsessed city, and this was obvious from the moment I arrived in the train station, as there were dozens of little vending machines selling coffee with a line of people at every one. Coffee is also sold elsewhere in the station, but people seemed especially into the machines - maybe because they are faster and cheaper. And I got there at 6am, so they were probably in need of their caffeine asap.

While it was indeed like being in a whole new world in a sense, L'viv's similarities to Krakow are also numerous and distinct, some of which I will point out in these two posts I will be doing about my trip. The western part of Ukraine actually used to be part of Poland as recently as the start of WWII, so I was expecting it to feel somewhat familiar. The city also has the reputation of being, like Krakow is to Poland, its country's cultural, tourism and education capital.

A park running through the middle of Prospekt Svobody/Liberty Avenue, the main thoroughfare in town and a former riverbed: 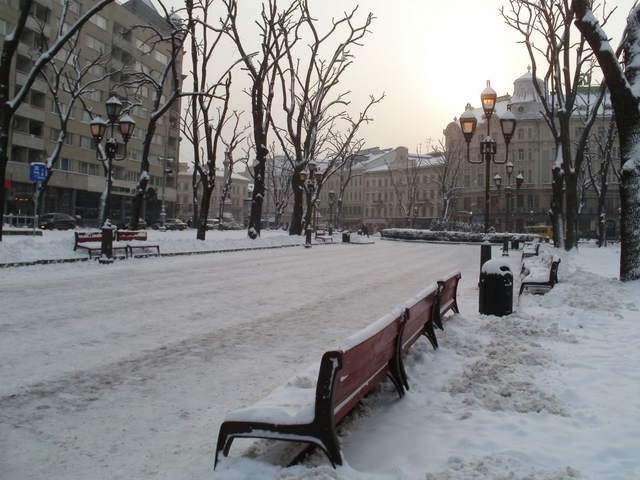 The city has a great tram network that I used to get to and from the train station and the Old Town area. It is extremely cheap...like literally fifteen cents per ride or something like that. Everything else is quite a bargain too, in part because all of the prices get divided by eight, due to the exchange rate with the dollar. That was way more fun to do than only getting to divide by three in Poland...but even that's still is better than nothing or having to multiply for the Euro or Pound!

Once I got to downtown, I was pleasantly surprised to find not one, but two Christmas markets still going on. They are very similar to Krakow's, with little wooden huts that sell seasonal food favorites, cold weather apparel, Christmas decorations and home decor.

One of L'viv's Christmas markets, on Prospekt Svobody: 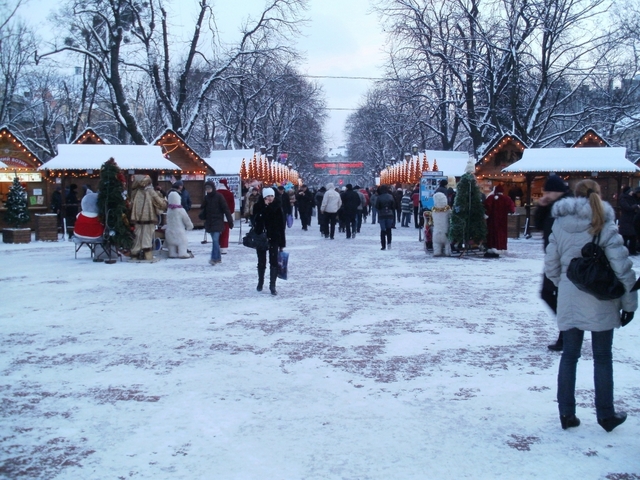 A giant present underneath a giant tree, at the same Christmas market: 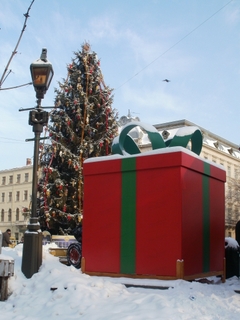 The city has two main areas in its downtown - the quaint, old town square where no cars are allowed, and a busy, wide boulevard lined with shops and restaurants that is built over a submerged river. The Old Town felt like its own little quiet village, and besides hosting one of the Christmas markets, it also had a skating rink set up, and with all the snow around, there was quite a nice, old-fashioned holiday atmosphere. Historical tenement houses surround a large town hall building that sits in the middle of the square, and many churches are also nearby. This whole area is also a UNESCO World Heritage Site.

The tall town hall tower can be seen throughout the area. Here it is on the left side of the photo: 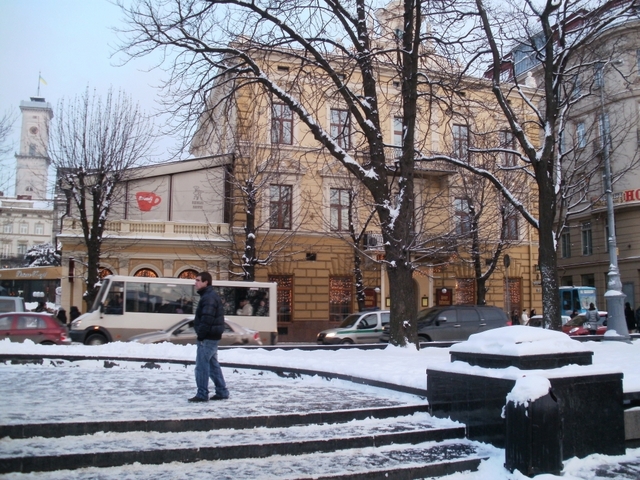 As a chocoholic, I was excited when I stumbled upon one of the things I wanted to see in Old Town but wasn't sure I'd find - a chocolate shop (L'viv Handmade Chocolate) that makes their confections on-site for anyone to stop by and watch. It was cool to see how all kinds of different treats are made, and I definitely didn't leave empty-handed either - yum!! Speaking of food, I also had a great dinner that night at the cozy Green Hills Park Cafe that included traditional Ukrainian borscht soup, which is a mixture of vegetables and generally dominated by beets.

L'viv is known as the Lion City: 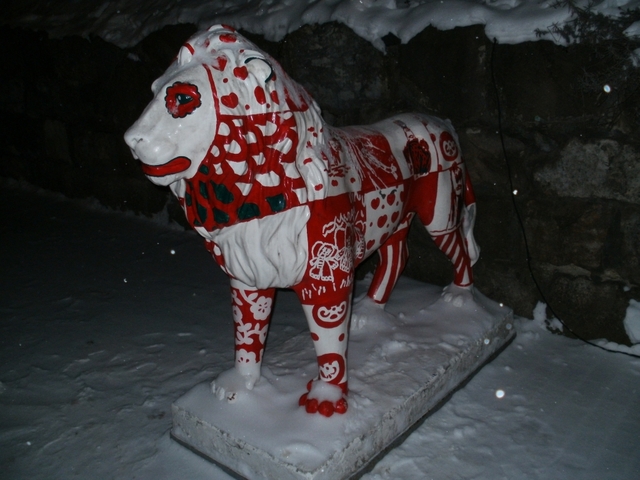 This guy must be rather chilly...:

I spent two days in this beautiful, captivating city, so I will write about the second day in my next post to keep this one from getting too big! Then after that, I'll cover the other nifty places I visited over break.