...and all expectations were beyond averred.

Sometimes things can look different in photos or videos than they actually are, which can lead to either disappointment or excitement, and in my first highly anticipated encounter with Rynek Glowny, Krakow's main market square, I was a giddy little schoolgirl stepping into a fantasy world. To say the least, I was certainly not disappointed. Even though photos I'd long been admiring had hinted at the wonder of the place, no photo could ever portray the largest medieval square in Europe as it actually is. And what IS it exactly? Well, in two words, absolutely magnificent. This town has a way of captivating all the senses at once like nowhere I've ever been before, and the square follows suit, while amplifying everything to a whole new level. A true charmer indeed.

My first glimpse of the lovely market square - the western half and the narrow end of the Sukiennice can be seen here.

Every single time I'm in the square I can't believe that I'm actually standing there. Walking alongside such iconic landmarks feels more like a dream than real life, or like I'm looking at pictures in a travel book of a place that I'd really love to go sometime.

"The Rynek" as many call it, still serves its original purpose as the city's gathering place, and draws a mixture of students, street merchants, other locals and tourists. Oh, and I can't forget the pigeons.

Krakovian pigeons are famous for being plentiful, but I was not previously aware that they are also of the beefy variety - the linebackers of the pigeon world - although, it's no surprise, with all the food and people who like to share it in the area.

Other well-known locals are the tall, distinguished-looking horses decked out in their best formal wear that pull passengers in dainty Cinderella carriages through Old Town. Quite the photo-op presents itself when several pairs of horses with their carriages are lined up in the northwest end of the Rynek waiting for customers. (Photo of this coming next time!)

One (of the many) things I really enjoy about Rynek Glowny is that there is literally always something going on there, at any time of day - morning, noon, night and late night. Even at 4am...not that I would know... Below are two photos of a Bollywood movie that I saw being filmed one day.

Second movie pic - look closely - that guy in the wheelchair is fake, lol!

Numerous permanent structures are situated in the square. The centerpiece of it all, the Sukiennice/old cloth hall with its pretty Renaissance arches, has been selling merchandise for hundreds of years and now is a hub for getting Polish souvenirs, relaxing at one of its cafes or exploring the museum upstairs.

The gorgeous Sukiennice all lit up as dusk arrives. I'll get a clearer shot to replace this one asap! 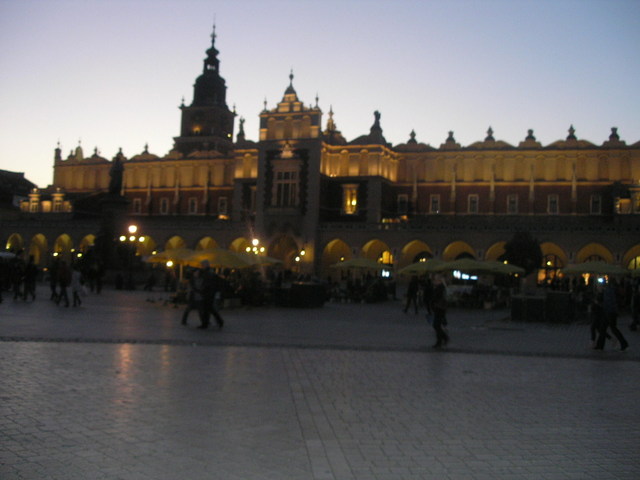 Several churches are also major fixtures, including the dominating, Gothic St. Mary's Basilica with its two high towers and red brick facade. Krakow's long history can be seen in all of these different architectural styles - something that I love to gawk at as I stroll along, nearly hitting lampposts and people because my eyes are to the sky, haha.

St. Mary's against the bright blue sky. A bugler plays on every hour all day long from near the top in commemoration of an old legend (more on that another time). The bugler even waves to people down below!

Various statues, fountains and the old town hall tower round out the rest of the main sights within the Rynek, but of course around the edges and beyond lies much, much more!

This fancy schmancy new fountain just opened last month and reportedly cost millions. It's quite entertaining to watch as it changes colors and switches water spouts on and off. 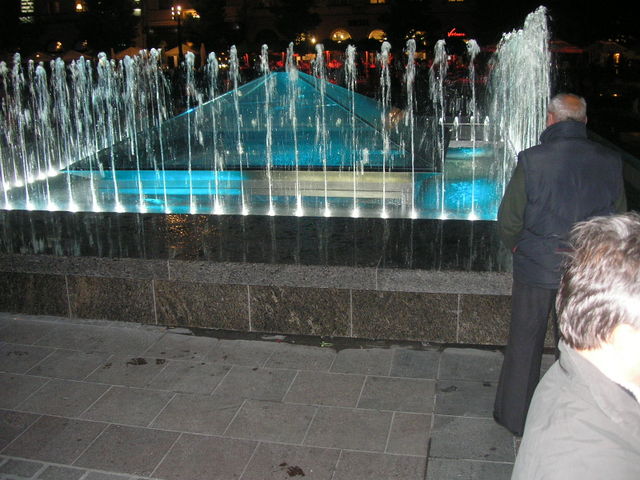 One funny thing about spending a lot of time in a square so large is that it makes any other square in town seem totally tiny, as I've come to notice.

Many of my favorite aspects of Rynek Glowny can be heard or seen while I'm sitting in class, since my school building overlooks it. This makes for great entertainment during a less than exciting lecture... ;-)

The western side of the Rynek. My classes are held in the wide, white building on the left side of the frame.

More about school and my wonderful classmates in the next post!