...but never thought I'd get to study in a place this cool!

Hello again! After lots of traveling within the region over my winter break and a little hiatus from writing on here, I'm back to share more tales from Krakow and the places I visited recently. But, first things first. It was requested awhile back that I give more insight into what school life is like here in Krakow. In one post I talked about it some, but I will give more details now. Living in a city as exciting and wondrous as Krakow, I could go on and on about non-school related things, as I have to an extent, but this time it's back to the books...well, sort of. That brings me to the first highlight of my academic experience in Poland. Oh, and I should point out that some of these may be unique to my program or department.

I don't have to read books. Hooray!! For someone who enjoys writing, it may seem quite odd that I'm not a fan of textbooks. While their content may be alright (sometimes), it's their weight and general clunkiness that I have a problem with. So, finding out during my first week of classes that literally everything I would ever need for studying here is online was a true joy for me.

The grading system is in numbers. It's essentially set up the same as in the US percentage-wise and with the number of ratings, but instead of A, B, C, D and F, digits are used here: 5, 4, 3, 2 and 1. There's also a little green grade book that I hand in at the end of each semester for the professors to write my grades in. So, instead of nervously and incessantly checking the university's intranet like in past years as the grades rolled in one by one, I now will get them all at once when I receive my book back...though still just as nervously I'm sure.

My classmates are a diverse bunch. I think I spoke about this in the earlier school-related post, but I'll mention it briefly again. Students in the whole of my classes come from literally all over the world, but the 18 students in my program starting this year are from the United States (about half of us), Europe, South America, Africa and the Middle East.

The school calendar is different. The semester system is still used, but they start in October and March instead of late August/early September and January. That means summer break is the months of July, August and September, perhaps due partially to that recurring Indian Summer that was the topic of one of my posts. Winter break gets a little funky, with two weeks off in December and then anywhere from two more weeks to a whole month off in February. Sometimes the end of June is free too, and this and the fluctuating February schedule is related to the next two sections.

Tests can be retaken! What?? I was baffled by this delightful concept at first, but apparently it's the norm 'round here! How very nice!! You know what else is nice about it? If all tests are passed during the semester, the TWO weeks of "test retake time" is just more time off! Wahoo!! This also makes test-taking during the actual semester slightly less scary, even though I'd still want to pass the first test if only to get that extra time off. ;-)

The professors can make breaks even longer! There is technically a "finals week" here, like in the US, but most of my professors decided to put their finals into the regular calendar, therefore making our (and their) break even longer this February! This could happen in June as well. The only drawback is that there's less time to study, but who am I kidding, I wasn't going to study anyway... ;-) And, speaking of those generous professors...

My professors come from different countries too. It's not just most of the students in my program that are foreigners in Krakow. Two of my professors are from Britain and one is from the US. Luckily, I have a Polish one too though, since I'm in Poland and all. :-)

I never change buildings or classrooms. Normally this might be a dull and bad thing, but when the building is on such a prime piece of real estate (on Krakow's main market square) and the classroom overlooks said square, I'm perfectly content staying in that spot for each class. Another benefit is that I never show up at the wrong place, as may have happened once or twice during undergrad...

Classes are a mixture of lectures and seminars/discussions. Three of my classes are mainly lectures, aside from presentations by students in one or two, while the two required classes are divided into a lecture and seminar. There are student presentations in those two as well...something that I don't like doing personally, but have thankfully gotten used to by now!

This semester, no classes were scheduled on Fridays. This was something I loved about MSU, Mankato - barely any classes were ever offered on Fridays, at least in my subjects. I was happy to find out it is the same way here, with the weekends starting early. And, depending on the optional classes chosen, it was possible to get Mondays or Thursdays off as well this semester, but all of this could change next semester. I'm hoping the Friday thing still holds at least though!

Those are all of the main points that I can think of for now, but please feel free to ask me about anything else you may wonder about my school or classes!

In my next few posts I will cover all of the fascinating places I got to go over Christmas break, but until then, I'll leave you with this utterly adorable photo of someone I met at the train station when we were both waiting to board our train back to Krakow. Yes, pups can travel on trains in Poland, but they need a ticket too! Awww. :-) 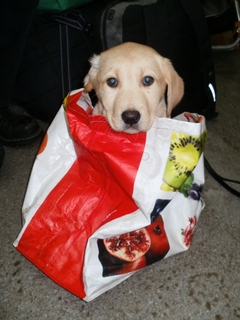