The first leg of my flight was wonderful. There were 50 seats filled and 160 seats open. At first I was the only unlucky person to have someone sitting next to them. Soon after, though, I had the common sense to move up a row so I could stretch out and enjoy the flight. It seems that not too many people want to go to London in January. My layover was a bit long, the journey through Heathrow a tad challenging, but in the end my connection went terrifically as well.  It was also quite an empty plane and I unexpectedly found my roommate in the airport which was a very pleasant surprise.

I seem to get incredibly lucky on flights generally. On my way home after the first semester I somehow messed up checking-in so badly that I was put in first class free of charge (Thank you British airways!). Also, despite flying from Boston to London to Edinburgh, all cities that don't have the best reputation for weather, I have never experienced any severe delays or inconveniences (knock on wood).

I arrived here two days ago and since then has been spent in a battle against jet lag fought with my roommate from Massachusetts.  Two of my roommates were here when I arrived and I couldn't have been happier to be reunited with them.  We spent the all of yesterday cleaning and rearranging our flat, which we have titled " The New Fancy Scott 8".  It is now complete with a communal tea area, an organized refrigerator and freezer, and a communal flat fund. 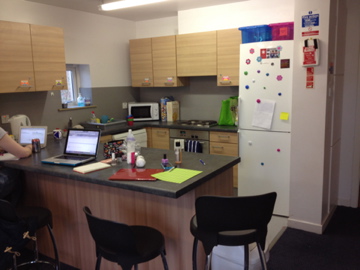 While this may seem minimal, it has, indeed, been quite the improvement from last semester which left us with a refrigerator covered in exploded Irn Bru, the unofficial national soda of Scotland, and a system completely void of any organization. The rest of my roommates are all coming back today and it will be wonderful to return to life as usual.  I'll be starting class again on Monday, and will be sure to keep you posted on how that and the rest of my weekend goes.  Wish me luck!