On Thursday we left for an Arcadia sponsored safari to the Manyara National Park where we saw Giraffes (YAY!), Elephants, Baboons, Zebras, and many many more creatures. Since going to Costa Rica and learning about the effects of tourism, I found that I approach the idea of an "African Safari" a little differently. When looking at all the dust kicked up by the trucks it was a little hard not to think of the impact on nature and on the animals our being there had. Before coming to Tanzania I was told a story about a group of indigenous peoples who lived outside of a game preserve and who, for centuries, had gotten their water from within what is now the game preserve. Long story short, the indigenous people are not allowed to get water because it not only takes away from the "preserve atmosphere" with them walking around, but also depletes the amount of water for the animals and trees important for tourism. According to our guide, Edward, the Maasai at the Ngorongoro Crater, where the Arcadia safari took us Friday, are also butting heads with the government over their right to live within the Ngorongoro Crater National Park. The government wants to move them out of the park to the outskirts of a nearby village, and the Maasai people there are asserting that they have right to live there based on a treaty and more than that won't be able to make a living if they are moved farther away from the crater. So, it is with these thoughts in mind that I gazed upon some of the most beautiful vistas I have ever seen. 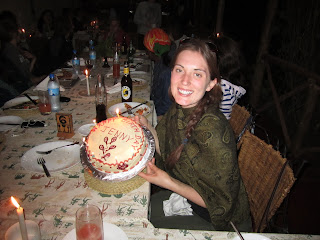 However, back to the first safari day! After a wonderful day at the Manyara National Park, we stopped in this little village with an "Obama Haircut Saloon" and a shop entitled "The Best Obama Shop." Unlike most villages we pass through, this one was thriving I believe due to its proximity to the Ngorongoro Crater, with a great lodge, that was probably made greater because of having to live in the NI Apartments (which are fine, but sometimes a hot shower and fluffy pillow is nice, lol). The lodge was really nice with a garden, bar, and restaurant. Before diner most of us got a glass of wine and sat still for a while instead of washing off the layers of dust from day one of the safari and after eating people started singing Happy Birthday, including myself until I realized that they were singing to me. It is amazing how time works in Africa, yesterday seems like last week and so I forgot that just the day before it was my birthday. Anyways, the picture above is me holding up my birthday cake that Roland (resident director of the Arcadia University program) had the women at the lodge make. It was a really really nice evening that summed up with dancing and traditional Tanzanian music, followed by the selling of drums and CDs. 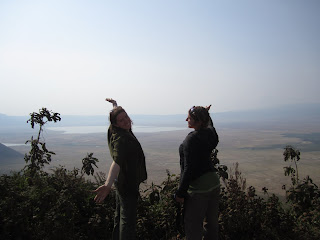 Now back to Friday, are you all keeping up? :) The Ngorongoro Crater was created when a mountain bigger than Kilimanjaro collapsed on itself about 5 million years ago, or so I was told so if you look it up and I am wrong.... oops! And within this crater are many many many animals, including a Leopard that I saw, which is a very rare sight so that was really neat. Along with the Leopard at the very beginning of the the day we saw a variety of four legged animals from the Lion King (I swear everyday I am in Tanzania it becomes more of a necessity that I get my hands on all of the Lion King movies to watch them!) including simba and a lioness copulating much to the amusement of our various guides who went into long monologues about lions and mating.... Yes, a very interesting and awe inspiring day from the hyenas to the polka-dotted birds trying to steal our food at lunch.