This is a guest blog post from Brittany, who studied abroad with CEA Global Education in Ireland during the spring of 2012. 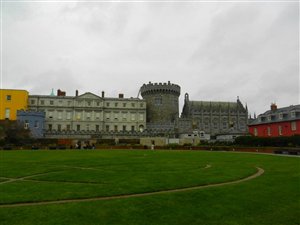 Calvino says, “arriving at each new city the traveler finds again a past of his that he did not know he had: the foreignness of what you no longer are or no longer posses lies in wait for you in foreign unprocessed places.” Foreign sights, smells and sounds overwhelm the senses.   When I first arrived in Ireland, the first few weeks were exhilarating, bizarre, and new.  Many things existed in Dublin that I was never aware of, or I simply never thought to question in America.  Simple, everyday situations in which I perceived as being “normal” for everyone made me question the “normality” of myself in this new place.  In the end, the question I found myself contemplating was not whether I changed the foreign place, but rather, did Ireland change me.

If you interviewed most people on how they define a city, there could be an array of results. Most would respond by saying its people, atmosphere, art, architecture, or the history that the city holds, in turn, defines it.  Calvino states that a city is not defined by these things, but by “the relationships between the measurements of its space and the events of its past.”  He further states that “the city, however, does not tell its past, but contains it like the lines of a hand, written in the corners of the streets, the gratings of the windows, the banisters of the steps, the antennae of the lightning rods, the poles of the flags, every segment marked in turn with scratches, indentations and scrolls.”

When I was studying in Dublin my favorite class I took was popular culture in Ireland.  The class gave me an opportunity to learn about the present culture in Ireland and the reasons why this culture exists today.  Most of our class periods were spent taking tours of the city and observing the cultures in different areas and districts.  Many people that are touring Dublin for a short period of time walk through these districts without fully understanding the meaning and history behind them.  In popular culture in Ireland class we focused on semiotics, which is defined as the study of signs and symbols and the interpretation of them.  In order to fully understand the Irish culture and the semiotics that they embrace, I adopted a veil of ignorance, and became completely unbiased when taking these tours throughout the city.

Culture changes the way we perceive all aspects of life, including semiotics.  For example, many Irish people may find the color green to be a sign of luck and many Americans might perceive the color green a symbol of wealth and money.  Once I became aware of the cultural differences in semiotics my experience abroad became more exciting.  I noticed symbols and pictures daily that made me question my way of thinking and the environment in which I was living.

On the surface Dublin resembles many other urban cities, including American cities.  Only when a person dives head first into the culture and lives and studies within that culture do they realize that this is false.  Each city provides a different culture and history that is told not only by the people that inhabit it, but also by the semiotics it embodies.   I encourage all students studying abroad to take a class on the culture of that state.  My experience allowed me to dive beyond the surface level culture of Ireland and truly understand the culture and its people.  Not only did it change the way in which I initiall