...one that in Krakow is not all that well known.

The riverside route that I walked to get to and from my Polish classes a few neighborhoods away over the semester break was luckily a very pleasant, pretty and entertaining one! All along the Vistula River (Wisła in Polish) in the city are foot/bike paths, peaceful parkland and plenty of benches to relax on. Even though I live right near this river and have spent lots of time by it before, exploring new areas of it and visiting it even more often led to some new discoveries!

Krakow's riverfront is not in the center of its Old Town, and therefore has a slightly different feel to it than other European cities that are set up the opposite way. The riverside here is pretty mellow (which I like!), even in nice weather, but I suspect it will slowly get a bit more busy as new places open up (like The Krakow Beach) and more boat trips are offered, which I've been hearing about. But, for now, the river doesn't seem overly touristy or commercialized, besides perhaps the part near Wawel Castle, which is still gorgeous enough to make up for any overcrowding. :-)

Over 650 miles long, the Vistula is Poland's longest river, stretching from the Carpathian Mountains in southern Poland all the way up to the Baltic Sea. This is also the river that runs through Warsaw. Thanks for the info, Wikipedia! ;-)

Beautiful sunsets can be viewed from this part of the river, near Wawel Castle (pic taken in the fall):

Boat rides are popular in good weather and are about to start up again (pic taken in the fall):

Birds of all kinds love the river, especially because they get fed a lot by passersby. This is the where the most birds congregate, near Most (bridge) Grunwaldzki : 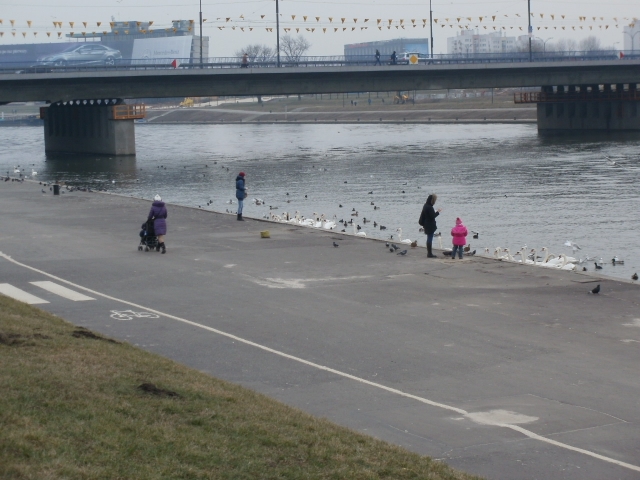 This snazzy new pedestrian bridge just opened in the fall. The boat parked by it is quite snazzy too: 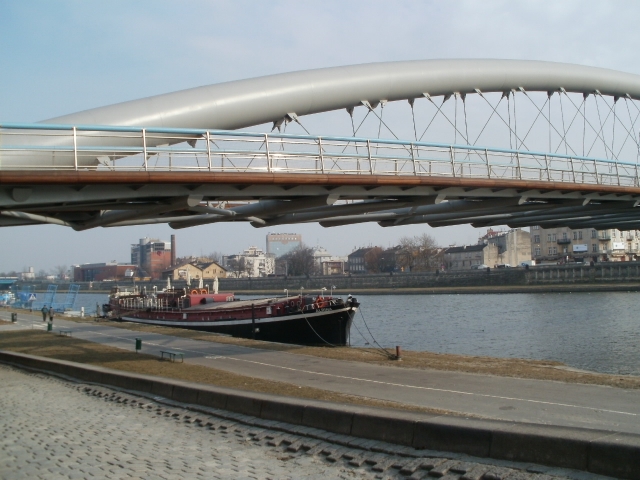 Locks with the names of couples written on them (on the pedestrian bridge). Legend has it that if you lock it there and throw the key into the river that the love will last forever: 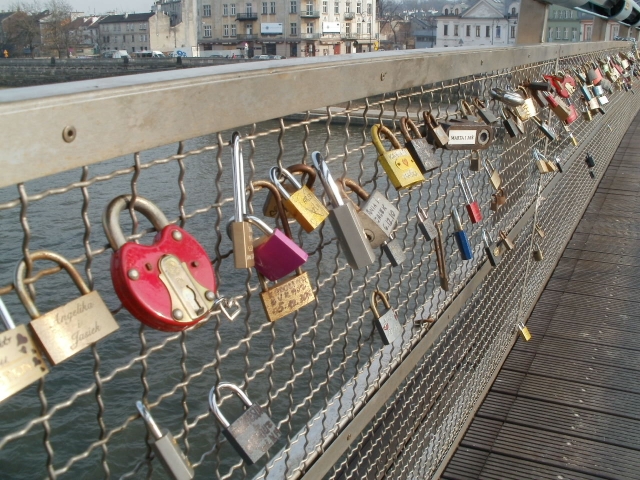 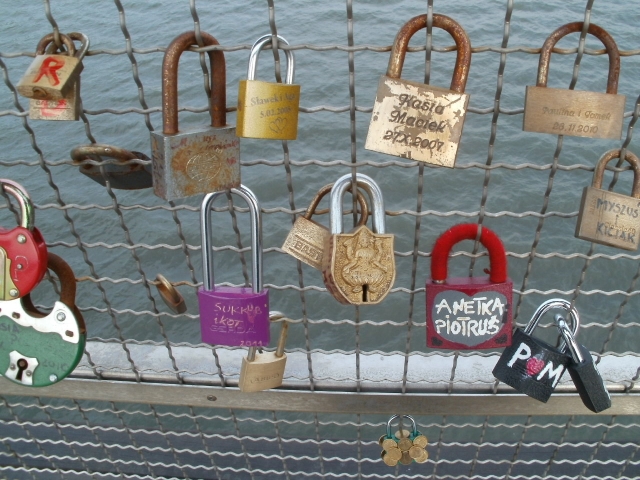 A tram rolls over Most Piłsudskiego, one of the many bridges that span across the Vistula: 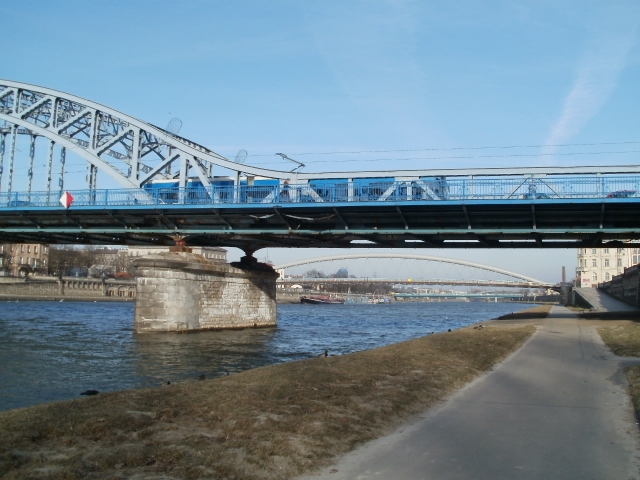 The "Smok Wawelski"mural, which means Wawel Dragon and is who the picture is of. The letters are made to look like Krakovian buildings: 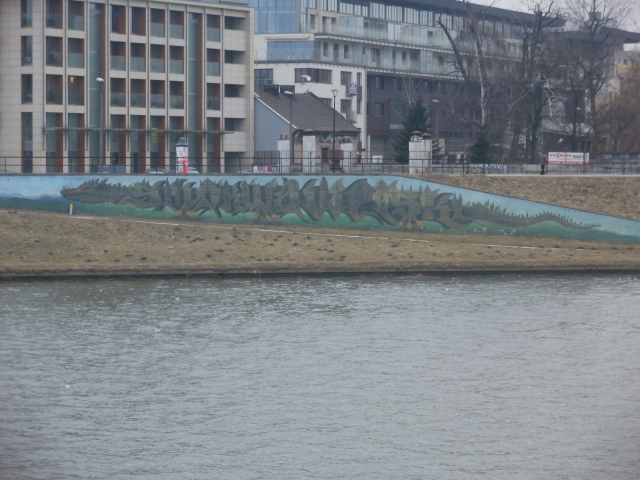 This is the new Krakow Beach complex, set to open soon! For now, the seagulls seem to be enjoying the barge pool at least: 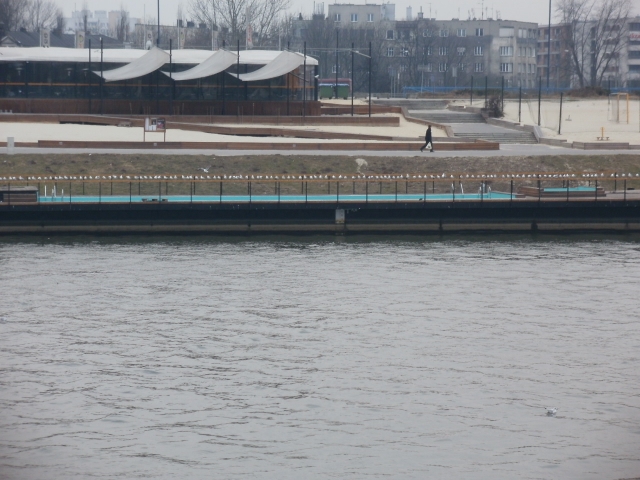 Pigeons hanging out near a floating coffee shop. Other restaurants and even a hostel can be found on area riverboats. Eateries on land with terraces overlooking the river are also common. 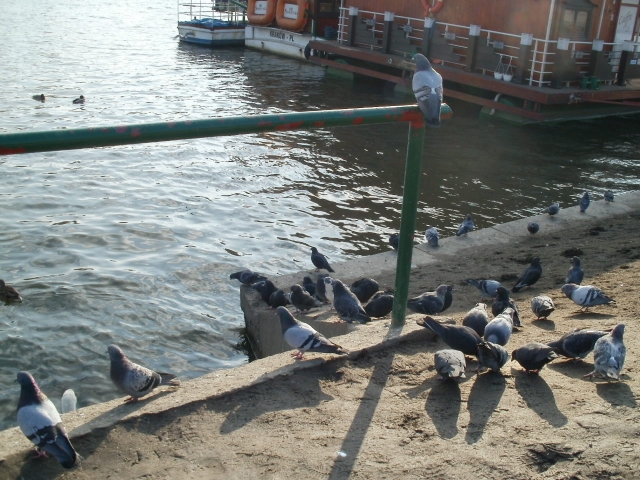 I did not spot any vans down by the river, but I did spot a cute car (below). In case the "van down by the river" reference doesn't make any sense, you must check out these three legendary comedy skits from the late Chris Farley. The first is the original I think, and two more can be clicked on in the side bar to the right:

Who needs The Club when you've got a whole crew of watchdogs to look after your car? 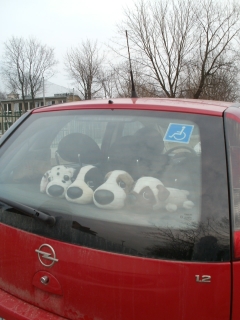 Since I always like trying new eating/drinking establishments here, I'll do what I did last time and include a photo from such outings. Here's one from a new restaurant I tried at the beginning of break - a Spanish place in Kazimierz called La Fuente with great tapas, sangria, wall art and music! 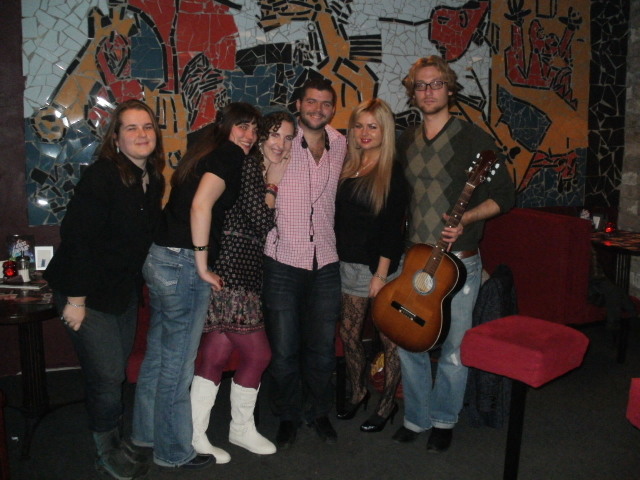 And finally, the Funny Pigeon Pic: Homeboys chillaxin at the "beach": 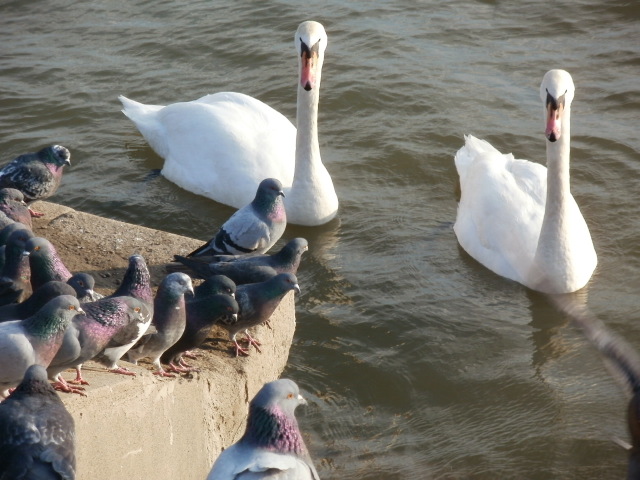 In my next post, I'll head up Wawel Hill and visit the castle as well as talk about the mysterious Hindu chakra stone that is said to be buried in the hill!