It seems like not long ago that I received one life changing email telling me I was accepted to the University of Canberra Exchange Program. After the rush of adrenaline, I settled down enough to type "Canberra" into my computer. I applied with my heart set on going to Australia, but I hardly knew anything about Canberra! I read what Wikipedia could tell me but those few stats and images hardly tell the story – the story of the best year my life. 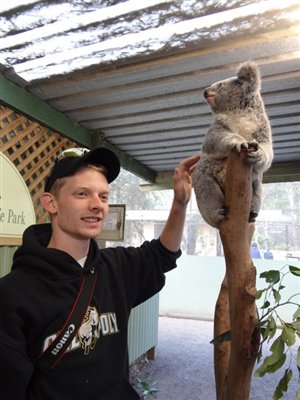 What made this year the best year of my life you ask? Well I could make a list 100 items long in about five minutes, and that would just be the start. But what was unique to the University of Canberra (or UC as we call it)? For starters it's the Study Abroad and Exchange program at UC. After hearing from fellow Cal Poly students who studied abroad all across the world, I believe UC's program is top notch. Thrown into this mysterious and magical land, they started me off right. The first week was an orientation program filled with trips around the city and capped with a trip to Sydney for all fifty or so study abroad students from dozens of countries. One week in and I already had heaps of friends! But that was only the beginning!

Shown to my thirteen-person apartment in Old Res I immediately met my twelve roommates, many Ausi and all 100% fun. Living on campus in Old Res was the most fun place I've ever lived. It was so great, in fact, that it even became the basis for my architecture senior project! There was never a dull moment – from weekly Old Res events with over 100 people, to family nights in the common room, there was always something to do.

When deciding where to study abroad I underestimated the importance of the setting. For me, being on a full blown Australian university campus was key rather than a small study abroad satellite campus full of other Americans. Living on campus gave me the best of both worlds – immersion into Ausi culture by living with all my Ausi roommates, and the comfort of living with other students and a few other Americans next door. Oh! Did I mention seeing kangaroos run though campus all the time? That’s a site I’ll never forget! Additionally, student clubs like the SIC and SECCS put on events and parties all year long.

With only two days of class a week there was plenty of time to explore. Canberra, the biggest city I've ever lived in, was full of things to do. There are always city wide events like Floriade, the Skyfire Fireworks festival, and the Hot Air Balloon Festival. There were tons of epic concerts featuring some of the best bands in the world; David Guetta, Flo Rida, Hilltop Hoods, LMFAO, Kaiser Chiefs, Def Leppard, and so many more! Festival concerts like Foreshore, Groovin' the Moo and Stonefest – many of them right on campus! Of course Canberra has a professional Rugby League and Rugby Union and the occasional Aussie Rules Football game. Then, being the capital, there is the plethora of museums, the zoo, Parliament Building and more. Being only three hours from Sydney, I made it up there thirteen times over the course of the year! I had plenty of Sydney by the time I was done! By air it's a quick hop to almost anywhere; Melbourne, Cairns and the Great Barrier Reef, New Zealand, Fiji and my personal favorite, Darwin!

Don't know if you can afford it? How does roughly $17/hr for minimum wage and only 4% unemployment sound?

The biggest problem with studying abroad in Australia is that I can't wait to go back, and nearly every other study abroad student from the University of Canberra feels the same way. In fact, a year later, many have already made it back or even moved there!

Looking back, I can't imagine going anywhere else for study abroad.