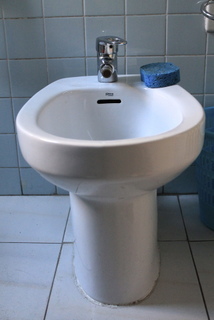 It
is of the utmost likelihood that you will use a bathroom during your study
abroad experience and there is a chance you may be confronted by a foreign
object inside. I certainly was as I opened the bathroom door.

While
bidets are common household features in Europe, the subject remains a
conversational faux pas. In fact, I have never heard someone ask to be directed
to the nearest bidet in any house, restaurant, or public area. People just
don’t talk about it. Some of you may even be cringing as I say the word bidet
and all things relating to said bidet. Because we have such a bidet taboo, I
bidare you to read about my bidaily experiences with bidets, which hopefully
will remove some of the bidangers you may face during your study abroad
experience.

There
are a lot of variables that can make your first day on the bidet a
nerve-racking experience: What is the proper angle of the faucet? What kind of
power are we dealing with here? Is there respectable bidet posture? How would
one go about choosing their personal bidet temperature? I especially noticed
that there was no arrow or directions of any sort, delineating even something
as simple as which direction to face.

For
me, the sponge next to the bidet posed another series of question. What is its
purpose, who may use it and how often is it cleaned? At that point, I decided
that these issues are much to complex to discuss with my host-family in
Spanish, which would require the most refined grasp of the language, a mastery
of the nuances of communication that a bidet conversation would require.

I
decided to forget about the bidet for the reason that I had managed to live
without one for 20 years.

But
then my host-mother presented me with a brand-new, tri-colored sponge. She said
it was for me. At first, I looked around for what she wanted me to clean and
then it hit me like a stream of cold water. Without asking questions, I put it
away in my room.

Now
the secrecy has been compromised. My host mother will know from now on whether
or not I use the bidet. Could this be a symbol, an ultimatum forcing me to use
the bidet? Now I think that gesture could have been a direct violation of one
of my rights: freedom of bidet.

Maybe,
the gift of the sponge represented a rite of passage in the household. Maybe,
in the words of Elaine Benes’s character from Seinfeld, I have been
deemed “Sponge worthy.”

I
can understand the benefits of the bidet. One of my friends told me something
vulgar, yet enlightening: “if someone pooped on your face, you wouldn’t wipe it
off with a napkin, would you?” It made me question the way in which I live my
life.

I
now wish I was forewarned. Nothing was mentioned in my books about Spanish
culture or in my travel guides. I don’t know where our relationship will take
us, but I hope that, when May comes, the bidet and I are able to go our
separate ways maturely with mutual respect.