Study shark physiology, habitats, conservation and myths. Scuba dive with sharks while collecting data for your own research project. Collect data for the Shark Foundation Database. Learn about the cultural and historical connection between sharks and Fij 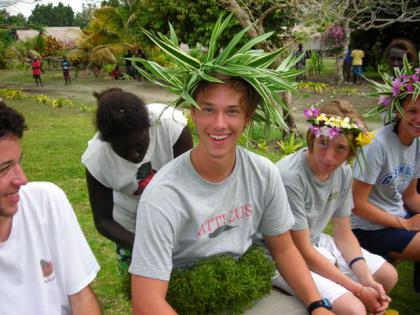 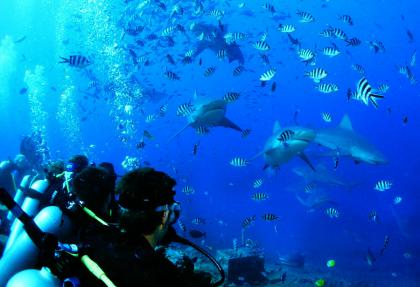 Most people that get in the water do their best to avoid sharks. On this academic expedition, we go looking for them. Survey the natural history, biology, behavior, and ecological and social importance of these formidable creatures that now, after millions of years, are in danger of extinction. Observe and study sharks up close in a controlled underwater environment at the Shark Reef Marine Reserve (SRMR). Witness shark habitats and work toward protecting them. There’s even time for a cultural visit in a Fijian village, where stories of an ancient protective Shark God are shared. In Fiji, it’s all shark week all the time.

Study shark physiology, habitats, conservation and myths. Scuba dive with sharks while collecting data for your own research project. Collect data for the Shark Foundation Database. Learn about the cultural and historical connection between sharks and Fijian culture. Immerse yourself in the culture of traditional Fijian villages. Learn about sustainable eco tourism. Earn three Marine Science college credits through Lesley University.

Program costs include tuition, housing, meals, excursions, orientation, airport pick-up & drop off, and student support throughout the entire program. It does not include international airfare.

Setting Description:
On the southern edge of Viti Levu, Fiji, a bull shark chases lunch, curious lemon sharks check out equally scuba divers, and a nurse shark relaxes on the ocean floor. It’s just another day at the Shark Reef Marine Reserve, a patch reef near the Beqa Passage. After arriving in Fiji, we head to Pacific Harbour to hook up with Beqa Adventure Divers. This dive outfitter will guide us into the reserve where shark behavior and physiology are witnessed up close, in a real world setting. Take the Beqa passage to western side of Beqa Island and land at Rukua Village. This traditional village is just a short boat ride (10 km) from Pacific Harbour, yet miles from modern day Fiji. The Chief will likely grant you permission to hike Shark Fin Hill. Broadreach will most certainly grant you access to a dive site on the north end of the island where sharks are known to gather. It’s not a question of whether or not you’ll see sharks, but rather how many. Return to the Shark Reserve for further hands-o