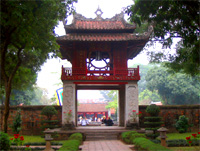 Hanoi. Never heard of it? Well that's a shame, because Hanoi is a spectacular location seemingly made for studying abroad, and if you are considering spending a summer, semester, or year in another country, you should give this city serious consideration.

Meaning 'river interior' and being located on the right bank of the Red River, Hanoi is flush with stunning lakes and rivers. The obvious beauty that comes with that is part of the reason the area has been inhabited for over 3,000 years. And 'from 1010 until 1802, it was the political center of an independent Vietnam...making it the oldest capital in Southeast Asia.'

With the abundance of bodies of water comes the abundance of rain: the city sees 1,682 mm of rainfall a year. But the climate is still very typically Vietnamese, meaning that summers are hot and humid while winters are cold and dry. And there is plenty of time to embrace that weather while getting from point A to point B on Hanoi's major form of transportation - motorbikes and bicycles.

Hanoi, believe it or not, was 'home to the first western-style universities in Indochina, including: Hanoi Medical College (1902), Indochina University (1904), andÉcole Supérieure des Beaux-Arts de L'Indochine (1925),' and has the Temple of Literature, which houses Vietnam's first university, Quoc Tu Giam, built in 1076 to educate Vietnam's mandarin class. Currently, Hanoi is the largest center for education in all of Vietnam, and is considered to be the cultural center of the country as well. Every dynasty has left its mark on the city in some way, making for an interesting present bathed in ancient past.

Which, as it always seems to do, leads to an interesting and dynamic population. 'The considerate and genteel nature of Hanoians is occasionally quoted in idioms and literature...a reflection of a past where Hanoi is the convergent point for much of the country's talents in arts and education. They are also a reflection of a system heavily entrenched in Confucian values where modesty and consideration of others were regarded with a higher priority than one's self.'

So the people are thoughtful, considerate, and very cultured, the area is lush and beautiful, and the education is topnotch - sounds like the ideal location to study abroad. While Hanoi is very much apart of the current world, it is bathed in past glory. It is, after all, the oldest capital in Southeast Asia and home to the oldest university in Vietnam. Not too shabby for a little city you might not have ever heard of, but should make sure you remember for now on.