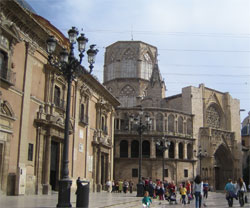 Valencia is a port city in the eastern half of Spain that has just as much to offer students abroad as do its more famous counterparts, Madrid and Barcelona. And, in fact, it may be even better than those other two from a cultural-immersion point-of-view. For while the two most famous cities in Spain are full of all the riches a visiting student could wish for, that also is their downside: So many students from all over the world, and so many tourists, flock to their streets and parks that experiences sometimes feel like more international than quintessentially Spanish.

Which is what sets Valencia apart so beautifully. For while it is, indeed, Spain's third-largest city (its metropolitan area has a population of more than a million people), it nonetheless manages to perfectly combine the hustle and bustle of a major city with the kind of quiet plazas and gorgeous parks that people often associate with the Iberian world. And these squares and gardens do much more than simply provide pleasing views for the tourists and locals: They are used on a daily basis, and are as integral a part of life in Valencia as its office buildings, cafés, and restaurants.

'The largest square is the Plaza del Ayuntamiento, which contains the town hall (ayuntamiento), a cinema which shows classic movies (Filmoteca), and many restaurants and bars. This is where the noisy fireworks of the mascletà can be heard every afternoon during the Fallas. [In addition,] The Plaza de la Virgen contains the Basilica of the Virgin and the Turia fountain, and is a popular spot for locals and tourists. Around the corner is the Plaza de la Reina, with the Cathedral, orange trees, and many bars and restaurants.'

And speaking of those restaurants, bars, and cafés, there is ample opportunity to take full advantage of them throughout your time there as a study-abroad student. The climate, after all, is classically Mediterranean, and therefore is perfect for making the most of all that this world-class city has to offer.

And it most definitely has a lot to offer: 'Valencia is famous for its vibrant nightlife. In the 1980s and 1990s clubbers would follow the 'ruta de bacalao' from Madrid to Valencia. Today, bars and nightclubs are concentrated in the Carmen and university areas. As is normal for Spain, nightlife does not take off until well after midnight.' And this, of course, is right in keeping with the lifestyle espoused by so many American college students!

But living in Valencia is not all about good times and partying and lounging in the Mediterranean sun in charming Spanish cafés. No, it's also about appreciating and learning from the unique history and indigenous culture of the city, as well. Indeed, 'this Hispanic culture's remarkable richness is visible everywhere in art and architecture reflecting Roman, Visigoth, Moorish, and Aragonese traditions. El Greco, Goya, and Velazquez; ancient Greek and Iberian ceramics; prehistoric fossils from archaeological finds: the city's many museums spread before students a dizzying panorama. Then there is the groundbreaking Ciutat des Artes-Europe's most ambitious melding of cultural, educational, and leisure activities. Well underway, when completed it will include the Museum of the Sciences, L'Hemisfèric cinema-planetarium, the Palace of the Arts, and a huge park and aquarium.'

The only aspect of life in Valencia that could potentially prove a bit confusing is the dual nature of the two official languages there: Valencian and Spanish. Valencian is the name for the dialect of Catalan that is spoken in and around the city, and while many students may not have a background in it before arriving in Valencia, they need not fear. Street signs and other aspects of the Valencian infrastructure are generally translated into Spanish in order to facilitate ease of living in the city.

All told, then, the climate, culture, architecture, big-city amenities and smaller-town charm make Valencia one of the best places in which to study abroad in Spain. So if it's a unique, exciting, educational, and rewarding experience you would like to get out of your time abroad, then there are few better places in the world than Valencia.