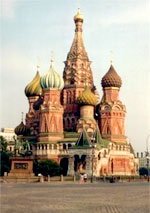 Moscow is central to Russia in many ways. It is geographically central and has historically been the political center during some of the country's most turbulent times. As the capital today, it is the center of politics and of the changes that are sweeping the country. More than any of these things, however, Moscow is the symbolic heart that has always sustained the vast land of Russia.

Studying in Moscow offers students the fascinating opportunity to see both the effects of the past and the promise of the future. The amazing history of the city can be seen in such places as the Kremlin, which features monuments from the different ruling powers over the ages. Ivan the Terrible and Stalin both ruled from the Kremlin, but so did the Russian Orthodox Church, a fact which can be seen in the many stunning cathedrals inside the perimeter.

For those looking for culture, Moscow is sure to satisfy in that department as well. The city is renowned for their selection of museums, theaters, public libraries, and concert halls. Wonderful art museums are spread throughout the city such as the Tretayakov Gallery, which houses the world's best collection of Russian icons and an impressive collection of pre-revolutionary Russian art. Also not to be missed are some of the city's literary museums. They are typically dedicated to a particular writer and often situated in that writer's house. Some of the more well known include Tolstoy, Pushkin, Dostoevsky, Gogol, and Lermentov.

Culture comes in many forms though, as Moscow consistently reveals. The city has some unusual cultural attractions to offer such as the VDNKh (USSR Economic Achievements Exhibition). The propaganda park shows the fascinating efforts of the government to glorify socialist accomplishments, but all funding for the park stopped in 1990. Today, it provides a crumbling glimpse into the past while simultaneously showing how Russia is changing, with the gradual replacement of many of the old exhibits with modern, private advertising displays.

Just as the VDNKh is beginning to change, students in Moscow can witness the winds of change that are sweeping the entire country. Moscow as the capital is the center of the economic and social reforms that are changing the face of modern Russia. Today the GUM (State Department Store) shows the effects of modern capitalism as it becomes the city's largest department store. The GUM faces Lenin's mausoleum across the Red Square - perhaps one of the ironies of the city's Soviet past meeting its capitalist future. However, the changes in Moscow do not necessarily center around the embracing of Western culture, but rather, the city is reviving its own traditions as people turn to traditional arts and markets and begin to restore cathedrals that were ignored or damaged during the militant atheism of the past.

While it may be cliché, Moscow can rightfully be compared to the traditional matryoska dolls that are eternally carted home by tourists as souvenirs. (These are the hollow, painted, wooden dolls that have progressively smaller dolls inside.) The city's construction has been compared to the matroyska dolls because you have Russia, and then Moscow, and then the Kremlin (the city within the city) and then areas inside the Kremlin such as Cathedral Square that are self-contained units in and of themselves. Similarly, Moscow's history, experience, and present can be viewed as a microcosm of Russia, and the different people and groups throughout the city play out smaller versions of these changes on a personal level every day. To study and live in Moscow provides an unparalleled opportunity to experience huge changes and sweeping forces through relationships with people who are experiencing them on a daily basis.

In all it has to offer, Moscow stands as the measure of all that is happening in Russia today. And it is well worth seeing the way things are changing!