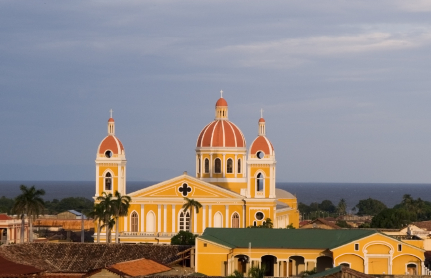 Nicaragua to Study Abroad: The Land of Lakes and Volcanoes

Roughly the same size as Alabama, Nicaragua is the largest country in Central America and home to over five million people. The beaches, the authenticity of its people, and a lush and untouched beauty are just some of the reasons to make your destination Nicaragua to study abroad.

While Nicaragua is the poorest country in Central America, thanks to its many agricultural exports, including tobacco, coffee, beef, as well as gold and seafood, it can hopefully look forward to a brighter future. And similar to its neighbor Costa Rica, Nicaragua has numerous protected national parks, nature reserves, and rain forests—and as its nickname indicates—many lakes and volcanoes. The difference? Nicaragua is less expensive than the more popular Costa Rica, a large reason tourism is on the rise in this striking country.

Visitors to this Spanish-speaking country can enjoy a culture suffused with renowned poetry and literature, with the likes of Ernesto Cardenal and Rubén Darío claiming Nicaragua as their birthplace, and a past checkered with tumultuous political events that make for interesting history lessons. And have we mentioned the food and drink? A favorite beverage among locals and tourists alike is the rum, known as flor de cana. A popular dish is nacatamal, which is dough made of corn and butter and includes a delicious blend of either chicken or pork with sweet peppers, tomatoes, onions, rice, and potatoes.

So you may have heard of the Palo de Mayo, Nicaragua’s famous dance, but we found some ecological gems that’ll really get you moving. Visit Masaya, a national park home to the active Santiago Volcano and Mombacho Volcano, or Islas de Maiz, popular vacations spots known as Big Corn and Little Corn, respectively. Or there’s Lake Cocibolca, or Lake Nicaragua, a fisherman’s delight, as saltwater fish have found their way into its fresh waters and evolved to survive, making them not found anywhere else in the world. Another draw to the waters of Lake Nicaragua? Its freshwater sharks, which are bull sharks able to move from lake to open water without difficulty.

Nicaragua hosts a triumvirate of locales sure to entice you and your curiosities: San Juan Del Sur, Granada, and León. San Juan Del Sur is a small beach town growing increasingly popular with guests for its waterfront and colorful landscapes. Granada boasts intricate colonial architecture, making it a fascinating stop for those interested in infrastructure and design, with strikingly different cathedrals, churches, and forts. León is primarily a university town, brimming with students and backpackers, making it a fantastic place to practice your language skills with those from all over the world. It is also a hot spot for religious preservations, as you can find the León Cathedral and Iglesia de San Juan Bautista de Subtiava, a church with an interior uncommonly fashioned out of wood.

May through November is when you’ll find the coolest temperatures in Nicaragua, but that doesn’t mean it’ll actually be cool. It rains quite often and will still be hot before and after the area’s frequent downpours. Fortunately, the only time those living in Nicaragua contend with overcrowding and higher prices is during Holy Week, or Semana Santa, around Easter.

A few tips: Typical in many markets around the world, you shouldn’t be afraid to haggle when buying wares or items off the street. Women can expect to wear more modest clothing and, overall, both sexes should consider breathable cotton or layers, as it can be much cooler in the evenings than during the day when in the mountains. Rehydration tablets and medicine for an upset stomach may also be beneficial if you are prone to food sensitivity.

How to Get To Nicaragua To Study Abroad

To visit Nicaragua, you’ll fly into the capital city of Managua’s Augusto C. Sandino International Airport. Depending on the program you choose and its location, you should be able to get around by taxi, car rental, motorcycle, or bus. Buses can be quite crowded, though, so as in any new and unknown area, you’ll want to stay aware of your surroundings and belongings at all times.

Explore our options for your study abroad program in Nicaragua, and find out exactly why this country is Central America’s best-kept secret.