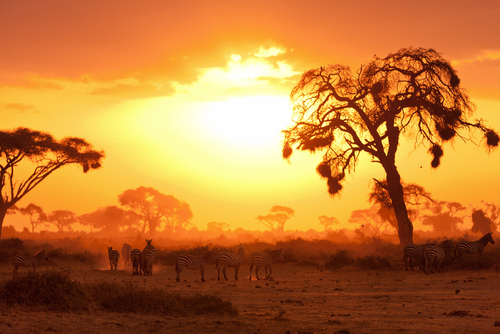 The forty-seventh largest country in the world, and a major exporter of tea, fresh flowers, and coffee, Kenya is named for Mount Kenya, the second highest mountain in Africa. With a namesake like that, studying abroad in Kenya is sure to take you to great heights!

Located in Eastern Africa, and bordering South Sudan, Somalia, Uganda, and Tanzania, Kenya is a land of beautiful mountains and vast deserts. Visitors to this country will find a great host of natural attractions and activities (sometimes both at the same time), whether sport fishing off Diani beach for marlin or sailing off the Lamu archipelago.

Kenya possesses wonderful World Heritage sites like Fort Jesus, built in 1591 to guard Mombasa, or the Sacred Mijikenda Kaya Forests, sacred and fortified villages. Other locales worth a visit? Wildlife reserves such as Lewa Wildlife Conservancy and the David Sheldrick wildlife trust, and national parks like Tsavo East and Tsave West National Parks, Masai Mara (famous for its annual wildebeest migration), Lake Nakuru National Park, Aberdares National Park; in any of these you may spot the “Big Five” of Africa: buffalo, elephant, leopard, lion, and rhinoceros.

Cities close to its coastline have a warm and humid climate, attributed to a proximity to the Indian Ocean, whereas areas closer to Mount Kenya are cooler. Kenya’s seasons seem to be opposite of those in the States: it is hottest in February and March, chilliest in July and August. It’s wise to pack layers, as it can be cooler at night and into the early morning hours (especially inland), before warming up for the day.

Studying abroad in Kenya will expose you to its two official languages: Bantu Swahili and English, respectively, though there are a reported 69 languages spoken, an indication of the large and varied population found in the country.

Cost of Living in Kenya

While studying abroad in Kenya, be prepared for food as diverse as the people living in the country. Staples include ugali (the national dish of cornmeal porridge), tilapia, beef, chicken, goat, rice, bread, and chapati (a paste of fried wheat powder). Fare includes kuku na nazi (chicken with coconut milk), vegetable curry, and maharagwe (red beans in coconut milk).

Your visit to Kenya will expose you to a wide range of culture, music, and the arts. Locals enjoy musical styles like the benga, a type of contemporary dance music, and hip hop, with melodic mixtures often found with African, Indian, European, and American influences. Musicians favor rattles, shakers, harps, the Wandidi (or, Kikuyu fiddle), and traditional drums. Many arts and crafts markets can be discovered throughout main tourist areas, where visitors may find (faux) elephant hair bracelets, Masai bead jewelry and figures, wooden carvings, and musical instruments like those mentioned above.

Kenya is well known for the iconic image of the Masai Mara tribesmen; red-robed men clutching colored wooden staffs and jumping into the air over and over to prove their endurance and ability. As for ability on the sporting field, Kenyans are renowned for long-distance running, with Olympic runners Catherine Ndereba, Geoffrey Mutai, and Paul Tergat as some notable names from this country.