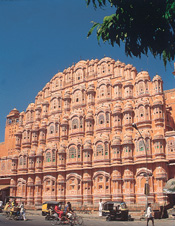 Jaipur is considered to be one of the most beautiful cities in all of India, especially at first glance. It is known as the Pink City because of the breathtaking pink stucco facades of its buildings. This color was chosen because the builders of the town wanted to emulate the famous red sandstone buildings associated with the Mughal Empire. Over time, of course, the colors began to fade, but much of the city was repainted in 1876 when the Prince of Wales visited. Today's tourists, both royals and commoners, are simply stunned by the colorful architecture that is the hallmark of this city.

The city itself is an exemplar of fine urban planning, and even to this day is considered one of the most well-planned cities in the world. Jaipur 'is laid out into six quarters, separated by broad streets 111 ft (34 m) wide. The urban quarters are further divided by networks of gridded streets. Five quarters wrap around the east, south, and west sides of a central palace quarter, with a sixth quarter immediately to the east.' The regularity of the streets and the gracefulness of the avenues are not only beautiful, but make touring around the city much easier for visitors.

Despite its relative youth, Jaipur, the capital of Rajasthan state, is one of the single most visited cities in all of India. This is a result not only of its physical beauty but also of its excellent attractions and tourist-friendly layout and residents. Highlights include the City Palace, inside of which is housed a wonderful museum that displays everything from clothing to weapons to carpets. The building itself 'is a historic landmark. The carved arches are supported by grey-white marble columns studded with floral motifs in gold and coloured stones. Two elephants carved in marble guard the entrance, where retainers whose families have served generations of rulers are at hand to serve as guides.' Other must-see sites include the Jantar Mantar observatory, the five-story Hawa Mahal monument, and the Jal Mahal, a 'tiny palace romantically located in the middle of a small lake.' There are, however, dozens, if not hundreds, of other sites which the ambitious visitor will seek out.

Modern-day Jaipur is a bustling city that manages to balance its past and the needs of maintaining its heritage with the demands of a modern-day industrial center. Also, with a population of nearly 3 million people, it should come as no surprise that it is also home to a fine university, the University of Rajasthan, which consists of '6 constituent colleges, 11 recognised research centres, 37 Post Graduate departments and 305 affiliated colleges. The University offers 37 Ph.D programs, 20 M.Phil courses, 48 Master's degree courses and 14 Bachelor degree courses.' Students from all over India, therefore, are drawn to Jaipur for their higher education. And because of this, international students, whether enrolling directly in the University of Rajasthan or studying in Jaipur through one of the many semester or year abroad programs administered by American colleges and universities, are commonplace.

Jaipur is a wonderful place to visit for week or two as part of a vacation, but even better to live and study in for a longer period of time. Its natural beauty, fascinating history, and relatively easily navigable layout make it the perfect place in India to spend a term abroad.