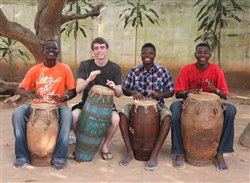 This is a guest blog by Jeremy Cohen, who directs the Study in Ghana program at the University of Massachusetts, Amherst.

Ghana is located on the Gulf of Guinea in the heart of culturally vibrant West Africa. An international tourist destination where English is the official national language, Ghana is one of the most exciting countries in the world to study abroad, and one of the safest, most well developed countries in Africa. The country’s rich history and unique cultural heritage sites draw students, professionals, educators and adventurers from around the globe to its welcoming shores.

A former British colony whose mineral resources earned it the name ‘Gold Coast,’ Ghana in 1957 became the first country in Africa to gain its independence. More than 50 years of political stability and economic growth later, today it is known as the ‘Gateway to Africa.’ For those who study in Ghana, nowhere does this ring more true than along the country’s glorious coastline, home to Kakum National Park rainforest reserve, the lush and culturally dynamic village of Kopeyia and historic Cape Coast Castle — all stops on ThisWorldMusic’s UMass accredited Study in Ghana programs.

With all that Ghana has to offer, it’s not easy to know where to start. If you’re interested in studying abroad in Ghana—whether it be African music, arts, culture, history or more—here is a definitive list of the Top 5 Places to Visit in Ghana.

Cape Coast Castle should be at the top of anyone’s list who plans to study in Ghana. Designated a UNESCO World Heritage Site in 1979, it is one of forty six former slave forts that dot the coastline of West Africa, forty four of which can be found in Ghana. Due to its prominent role in the trans-Atlantic slave trade, Cape Coast Castle is an absolutely integral part of world history and a must-see on any study abroad trip to West Africa. 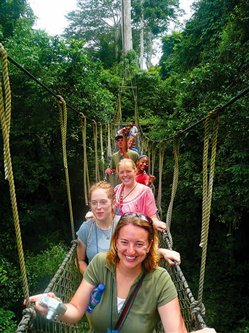 At over 92,000 acres, Kakum National Park is the largest protected wildlife area in Ghana. Since the majority of the animals that live there are nocturnal, the real draw at Kakum Park is its famed “Canopy Walkway,” a series of seven steel cable reinforced foot bridges that run between the rainforest treetops. Since Kakum is just a 45-minute drive from Cape Coast, most people who study in Ghana visit the two in close proximity. If you really want to see the animals, there is also the option to camp overnight in the forest, then wake up early for a guided night hike.

Reputed to be the largest outdoor market in all of West Africa, Kejetia Market is located in Kumasi, the capital of the Ashanti Region. Get lost among the more than 10,00 stalls (!) that sell everything from toiletries to spices to traditional African cloth. When you go, be sure to pay a visit to the Kumasi Cultural Centre, which borders Kejetia to the North.

Although most people who study in Ghana tend not to make the trek to the more remote Upper West Region, those who do will find a real gem in the Wechiau Community Hippo Sanctuary. This innovative conservation project protects a vital stretch of the Black Volta River and the hippopotamus population that lives there. An eco-tourism hotspot, Wechiau is also home to over 250 species of birds, as well as baboons, hedgehogs and chameleons.

Visit our website for more info on Study in Ghana programs. Enrollment is open to both students and the general public in the U.S. and Canada. Participants earn academic or professional credit through the University of Massachusetts Amherst.

Jeremy Cohen is a Boston-based percussionist, composer and educator. He is founder and director of ThisWorldMusic, which partners with educational institutions and arts organizations to offer innovative, hands-on cultural learning experiences. He is Adjunct Professor at UMass Amherst where he directs the study abroad program in Ghana, West Africa. He holds a B.A. from the University of California Berkeley and a M.M. from The New England Conservatory of Music and studied traditional drumming & dance in Africa.