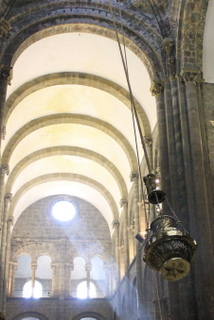 Cathedrals are something I’ve gotten sick of during my study
abroad experience in Spain, but the visit to Santiago de Compostela Cathedral was
one of my favorite aspects during the weekend trip to Galicia.

Built over the 13th and 14th centuries
and gothic in style, the building looked as if Atlantis had surfaced there. In
the dim light of a cloudy day, the windows were tinted green by oxidation and
ornate spires and sculptures of the façade soared to neck-wrenching heights.

Because we arrived during the final phases of an intricate
stained-glass restoration, we were able to climb scaffolding to the roof and
enter the cathedral through a window. On a restoration platform, we had a
close-up view of the windows, stained-glass mosaics depicting all things
Christian.

We exited onto the roof, which was made of angled steps to
facilitate walking. While the church bells rang to signal that mass was
approaching, I had the best view of the city. We looked down from the highest
point in the city, upon orange, terracotta roofs that weaved together for miles
into faded mountains in the distance. By now, the rain clouds were replaced by
lush white clouds dispersed in a striking blue sky.

Spanning 318 feet and rising 72 feet, the cathedral is one
of the largest Romanesque churches in all of Europe and certainly Spain. Many
believe that the church guards the buried remains of the apostle Saint James.
So many, in fact, that the cathedral was the destination of the Way of St.
James, one of the most important Christian pilgrimages during the Middle Ages.

I sat in on my first mass with my friends and apparently the
whole city. We went to see one of the city’s most prominent icons. Called a Botafumeiro, the censer dispenses
incense by means of a pulley mechanism that swings it back and forth.

Weighing 176 pounds and 5 ¼ feet in height, the censer is
the largest in the world. Filled with charcoal and incense, it is swung by
eight red-robed tiraboleiros. The
most common explanation of the 700-year-old custom is that it helped to mask he
stench of throngs of dirty pilgrims.

For me, watching the censer sway back and forth like a
wrecking ball was unforgettable. It would rise to the ceiling and fall back
down through clouds of incense. A false move by the tiraboleiros and it would have surely crashed into people or the
barrel-vaulted ceiling. It was the metronome for the service, marking the
heartbeat of the city.

When it slowed, still maintaining sufficient momentum, one
skillful tiraboleiro grasped the
censor, jerked it off course and spun harmoniously with it until both came to a
stop.

After 700 years, it’s good to know that at least one Spanish
cathedral still has the swing of things.